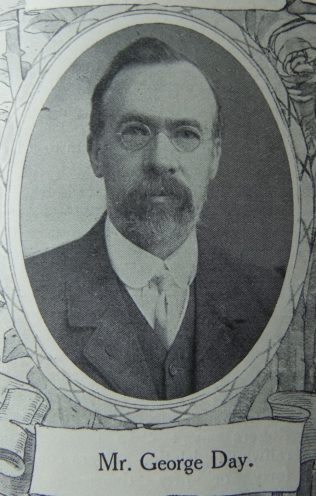 Mr. George Day, the Circuit Steward of the Cirencester Circuit, is the elder son of Mr. Jehu Day, who was for many years one of the most highly respected officials in the Circuit.

For the last thirty years he has been a Local preacher. He is Sunday School Superintendent and Society Steward of Chedworth, and for the last six years has been Circuit Steward. He is a native of the Circuit, being born at Ampney Crucis, July 1st, 1857. He ran wild and gave great cause for anxiety to his parents, who had built great hopes on his future usefulness. In due time they saw their prayers answered, and the seed sown bear fruit.

Mr. Day is a member of the District Committee. He has been Delegate to District meetings. He is a busy man, and is in labours abundant both for the Church and State. May he long be spared to adorn the Church of his father.

George was born in 1857 at Ampney Crucis, Gloucestershire, to parents Jehu Day and Mary Millin. Jehu worked the land.

George married Mary Ann Archer (b abt1859) in late 1880 in the Northleach Registration District, Gloucestershire. Census returns identify one child.

George died on 10 June 1923 at the Memorial Hospital, Cirencester, Gloucestershire.