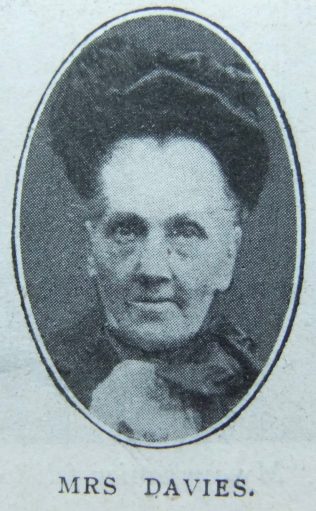 ON Sunday morning, January 11th, there passed away from our midst a sister whose record has been one of untiring devotion to the cause of her Master, Christ.

Harriet Davies started life on this side February 7th, 1847. Quite early she commenced to work at Pontnewydd, within Pontypool Circuit. In Sunday school, in Band of Hope, and in the many forms of service connected with churches, Mrs. Davies has been one of the most dependable souls.

For about fourteen years the family was located in one of the villages of the then Swindon Circuit, and there, as at the first home, and later in Newport, she was diligent in doing what she could.

But her special record has been in connection with the Lyne Road Mission of Newport (Mon.) Circuit. As seller of tea, lecture and concert tickets, her work has had no end. As the manager of teas and efforts to keep the cause going, she has sacrificed much time and strength, and fought on despite discouragements many. She was well-known by those disposed to help, and sometimes, perhaps often, succeeded in securing help where others would have failed.

The metal of which she was made was shown in this: When, on account of bad weather, her husband, who earnestly shared her work, would have dissuaded her from going to the service, she would reply: “It is the Lord’s work; we shall take no harm.”

In later months of her life, however, her strength evidenced signs of decline, and ultimately bronchitis and heart trouble sent her to bed, from which she never rose again to take part in any work either of church or of domestic kind. She suffered much, but with resignation, save that at times she prayed that if it were the Lord’s will she would like to depart.

For her the call to go higher was a great release and a triumph, though for the husband, the five daughters, and two sons, her going was a sad loss. Yet are they and we sure she is in the Light; and so, with that picture in the mind, we would move on until we join the shining hosts.

To a sorrowful yet assured company the writer spoke in a memorial service, held on Sunday evening, January 18th. To her family and fellow-workers may her memory be a continuous inspiration and call!

Prior to her marriage Harriet worked as a domestic servant.