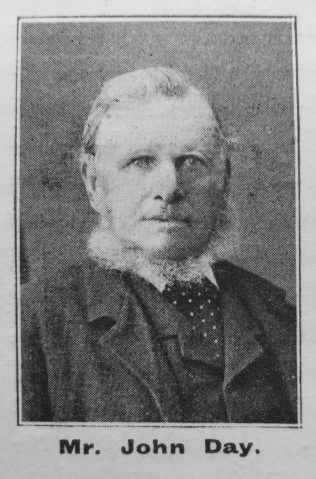 Bro. John Day, of Chedworth, on the Cirencester Circuit, exchanged mortality for life, January 31st, 1903. He was born at Ampney Crucis, in Cirencester Circuit about 1826. In his younger days man-fighting and other brutal and degrading sports were very prevalent in the neighbourhood where he lived, and into some of these he entered with very great zest. But mercifully, in the year 1857, he was arrested by the Holy Spirit, and through the assistance of the Ampney Crucis Primitive Methodist Society he was brought to God. He then became as valiant in the service of Jesus Christ as he had heretofore been in the service of Satan. Having buckled on the armour of righteousness he never put it off until death terminated his earthly career. His conversion took place shortly after his first marriage. His wife was unsaved. He immediately became intensely concerned about her salvation. He set himself to pray for her, and never ceased until one night after wrestling with God for pardon and obtaining it, she said to her husband, “I can pray for myself now.” She made herself useful in various ways, and after a few years’ consistent walk and conduct she passed triumphantly away exclaiming as she went “Glory to God, I am happy.”

The Lord gave Bro. Day two sons, and their conversion was a matter of great concern to him. But he lived to see both of them brought to a knowledge of the truth.

He was much given to prayer. Being a man of exceptionally strong passions, he felt his need of the weapon of all prayer and he used it often and well. The barn, the stable, the open field, to say nothing of his closet, could they speak, would bear testimony to his diligence in this exercise.

He travelled hundreds of miles as a local preacher, publishing the everlasting gospel; and doubtless many precious souls will be the crown of his rejoicing in the day of the Lord.

As a preacher he was fond of dealing with vital subjects, the justification of the ungodly, the sanctification of believers, the atonement, and such-like themes. He had experienced in his own soul the vitality of the truths he preached to others. He knew what the gospel had done for him and believing it could do the same for others he spake boldly as he ought to speak. He was a stalwart in his circuit — a pillar of strength. He was no reed shaken with the wind. He was no opportunist either, he stuck to his circuit through evil report and good, through honour and dishonour, and was deeply interested in it to the very last. He was delighted to hear of its prosperity and would sometimes say to me “I wish I was young again that I might do deeds of valour for the Lord.” He was deeply interested in the welfare of the Society in the town of Cirencester, and rejoiced with exceeding joy to hear of its prosperity. He took a prominent part in the management of the circuit, and was very seldom absent, from the Quarterly Meeting. His sympathies were wider than Cirencester Circuit He was a well-wisher of the old Brinkworth District, and was delighted to attend its Committees and District Meeting. He had a lively interest, too, in the entire Connexion, and often prayed that the Connexion as a whole might rise and prosper. Several times he attended the Conference as a delegate, an honour of which he often spoke, and which he much appreciated to the end of his days.

He was a liberal supporter of the cause of Christ at home and elsewhere. He gave scores of pounds to the circuit chapels and other funds.

His last affliction was lengthy and severe. He needed much grace. For many months he was not able to lie down in bed. His cough, shortness of breath, weakness of heart and dropsy were a great burden to him, but he rolled it all upon the Lord, and whenever I visited him I always found him confident.

He has gone “within the veil,” “to an innumerable company of Angels,” “to the spirits of the just made perfect,” and to “God the Judge of all.’’ He rests from his labours, his works follow him. May God give the aged widow, the two sons and their families, grace to follow him as he followed Christ; and may they, together with the writer, finally meet him where sorrow and parting are unknown.

John was baptised on 1 January 1826 at Ampney Crucis, Gloucestershire. His parents were John, a labourer, and Lavinia.

I have not been able to identify John’s first wife; the marriage and her death took place between 1851 and 1861. Census returns identify two children.

John married Elizabeth Day (b abt 1820) in late 1861 in the Cirencester Registration District.