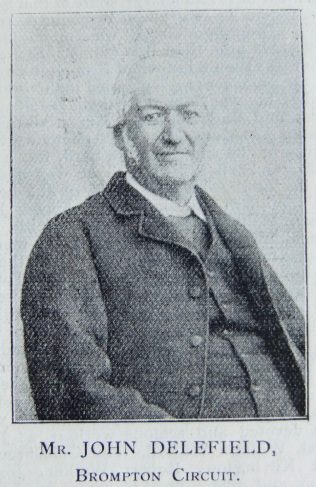 Transcription of Sketch in the Christian Messenger by J. Elliott

In north Yorkshire and south Durham, few names are better known by Primitive Methodists, especially of the older generation, than that of Mr. John Delefield. Of recent years, for obvious reasons, the sphere of his labours has been narrowed, but in the hey-day of his vigour he was a frequent figure before the public of those districts.

In person Mr. Delefield is of about the medium height, broad and sturdy, with large head, open countenance, firm, full voice — made, you would think, on purpose for work and endurance. When in conversation with him you would scarcely think he was in his eighty-first year; sight and hearing are but very slightly impaired, and he is mentally alert, and deeply interested in public questions, especially religious questions; hence as you hear him talk you forget that he is an old man. And yet eighty-one years is the ripe age to which he has attained, he having been born at Appleton Wiske, in the North Riding of Yorkshire, Brompton circuit, in the year 1818; and he is in the unique position of having lived all his life in his native village.

He was converted in his sixteenth, and began to preach in his seventeenth year, and has been engaged in that work for the long period of sixty-five years. He still preaches occasionally; takes at least one appointment in the quarter at his own place, and one for the Wesleyans, besides sharing the responsibility with his friend, Mr. John W. Dedman, of supplying misses through bad weather, etc.

If it be good, as we are told it is, for a man to bear the yoke in his youth, then Mr. Delefield must have had a large share of that goodness, for he was early well disciplined to the yoke. Brompton circuit was much larger sixty years ago, than it is to-day. Stokesley circuit was then a branch of Brompton circuit, and the preachers were planned in the branch, so that he was inured to long walks, bad roads, and dark nights. But nevertheless they were glorious days, conversions were frequent, and the work, though hard, was a joy.

The ministers with whom he was associated in those early days were of the heroic type. William Towler, Joseph Spoor, John Wilson, William Lister, Thomas Smith, and Colin C. M’Kechnie, were among the men he delights to speak of. How the fire of the old days seems to kindle as he tells of how Towler used to fill the chapel at Appleton Wiske on week-nights, and how the people were thrilled by his power and eloquence; and of Spoor who was more like a seraph than a man, kindling all he touched and setting the whole circuit in a blaze of glory! You feel as you listen to his recitals that those must have been apostolic days. Then among his lay associates were such devoted and zealous workers as John Wood, William Wilford, John Goldsbrough, John Kilvington, Robert Walker, Joseph Dixon, and others, most of whom have gone to their rest, and of those who remain Delefield is the only one in active work.

But besides doing the ordinary work of a circuit local preacher, for some years he occasionallv went out as an evangelist. Such places as Middleton-in-Teesdale, Allenheads, Allendale Town, Nenthead, Alston, Garrigill, Shildon, and Leamington-on-Tyne, shared in his labours in this capacity. But as a revivalist we must not think of him as indulging in sensationalism or eccentricity. His gifts were not of this order. He was sober, solid, weighty. But he was not without success, especially at Nenthead, in the Alston circuit, and at Allenheads, in the Allendale circuit. At the former place there was, as there is at present, a strong society. On his first visit, there were fifteen local preachers, of whom the Rev. Robert Hind, of Middlesbrough was one. A good work broke out and about one hundred were added to the church. At Allenheads the work for some time did not advance, but one night Delefield dreamt he was preaching on the subject of the Prodigal Son, and had a glorious time, the fountain of his soul was broken up, and the tears rolled down his face. The succeeding night he took the subject of the dream although he had not previously thought about it, and the experience of the dream was repeated; they had a powerful service and ten converts, and the work went on until more than a hundred were converted. In conducting services of this nature he spoke largely impromptu. Occasionally he would preach a written sermon, but as a rule they did not take; he could only impress the people by what was born of the occasion. At other places he had success, but it was less marked than at the two places just named.

In his ordinary work he prepared very carefully for the pulpit. He had a high conception of the work of the preacher, and felt that it demanded the best he could do. He eschewed ‘ Pulpit Helps,’ and did not make large use of commentaries, but bent his own mind to the subject; hence his sermons were original in the best sense. Some of his favourite subjects were the Transfiguration, St. Paul’s conversion, the Dew unto Israel, the Writing on the wall, almost persuaded, the Philippian jailor, the prodigal son, the call to decision, and St. Paul’s grand allegory of the law and the gospel. On these subjects, and many more, he would dilate with much power and freedom.

Then again our friend is a lover of books, especially theological. He has no taste for fiction. He is not an idealist, and on moral grounds has some objection to novels, although in this he professes to be a law unto himself only. His literary tastes lie in other directions, in the direction of theology, mental and moral science, biography, and history. In his early years he read such works on theology as were available, as Clarke, Chalmers, Wardlaw, and Richard Watson. Other authors he gave some attention to were Locke, Reed, and Wayland; but the two books which especially interested him at that period were George Steward on the ‘Mediatorial Sovereignty’ and Butler’s ‘Analogy.’  But our young readers will perhaps scarcely be interested in knowing these things; such books are too old, too hoary, they are not read now. And yet it should be of some interest to us to know the kind of pabulum that nourished our fathers and made them so strong and brave. Our old friend still reads books, and is glad to get hold of a new one, but it must be of the substantial sort. Pull-pastry is not to his taste. Possibly it. might have given additional charm to his ministrations if he had had a little more of the ideal, the poetic, and the fanciful. But nature’s treasures are not all found in one place. The rock may not have much adornment, but it is beautiful in its strength, and Mr. Delefield’s is a strong nature, and loves strong things. There is one book, however, of these later days, which, it must be said, has greatly interested him – Dr. Fairbairn’s ‘Place of Christ in Modern Theology,’ and would he not be delighted if the simple mention of this fact should lead some young man to read the same! He is full of enthusiasm for the distinguished author, and courageously declares hint to he the greatest theologian of our time.

Then, also, there is in our venerable friend an element of progressiveness. While full of gratitude and admiration for the past, he yet sees good in the present, and has hope for the future. He does not talk of the degeneracy of these times; he does not laud the past over the present. If he were inclined to do so the present condition of his native village would lend itself to such a humour. In the days of Towler and Spoor, the village was crowded with an industrious and prosperous people. The noise of the shuttle and the distaff came from every house, congregations were large, and there was a society of seventy members. Now the village is comparatively deserted; the days of the hand-loom are over, congregations are small, and members few. But he does not dwell on these things. He does not set the former times against the later; he recognises the change of circumstances, and rejoices in the thought that while the tide ebbs at one point it flows at another.

Mr. Delefield is not a connexional man in the official sense. He has not been to Conference; he has several times represented the circuit in District Meeting, but he has no place in our official courts. Still, in the best sense he is connexional, in that he is loyal to our doctrines, polity, institutions, and ministers. He loves our services, and has given more than three-score years of labour to the Church of his choice.

We hope for our friend a few more years on this side of the flood. They may not be many, they cannot be many, but we hope a few for him, that he may rest as the warrior after the battle; that he may reflect on the past, and anticipate the future; that he may prepare to meet the King for whom he has fought, and for whose mercy he hopes and for whose gracious acceptance of services well meant he prays. Of all the consolations of age the best is the memory of a good life, and this, although not unmixed with errors and faults, he has. When his time comes may he take his place
‘In that Home which was not founded tor a day,
But for eternal years.’

John was baptised on 25 December 1818 at Appleton Wiske, Yorkshire. His parents were James and Jane.

Note: Many records have the surname as Delafield