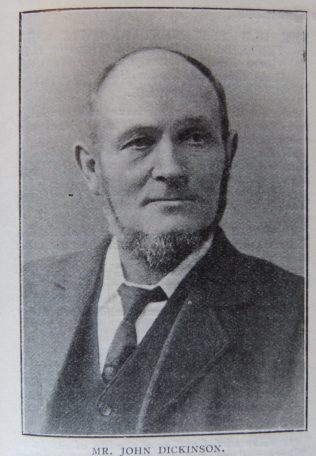 The steady advancement of the Middlesbrough Circuit in recent years is well known. Congregations have been continuously increasing, conversions have been well-nigh constant, and developments have been initiated which have proved successful from the outset. It is perfectly amazing to think of the varieties of ministry that are being daily exercised, and of the thousands of people, old and young, who are under the influence and inspiration of Primitive Methodism in the town.

It is the simple truth that the progress has been largely secured by the generous, devoted, capable and co-operative action of a host of men and women. Few Circuits can boast of such a multitude of talented and enthusiastic workers. In every department we are efficiently and earnestly served.

One among the many deserving of recognition is Mr. John Dickinson. Though a native of Kirkby Stephen, in Westmorland, Mr. Dickinson must be regarded as a Middlesbrough man. Born on December 23rd, 1838 he came to Tees-side in his fifteenth year. Returning to Kirkby Stephen eight years later he came back to Middlesbrough four years afterwards. During the last forty years he has been a resident in the town and an official of the Circuit. Quite recently in the columns of the North-Eastern Daily Gazette he wrote “Reminiscences of Middlesbrough Fifty Years Ago.” The articles were of exceptional interest and evoked congratulations form many quarters.

Mr. Dickinson was converted in his native place, the first convert of a memorable revival. At that time the Primitive Methodists of Kirkby Stephen had a meeting-place in a room above a stable. The Rev. James Warner  was the minister at that period. Mr. Dickinson was in his twenty-sixth year when the work of grace was wrought in his heart. Then began his career of Christian service which has been continued to this day.

In 1870 he was put on the plan by Rev. James Jackson, and for five-and-twenty years gave himself with diligence to the preaching of the Gospel. During all those years he never missed an appointment. The present writer has seen Mr. Dickinson’s sermon record book, the book in which notes were kept of the sermons preached at various places, and of souls that were saved. The converts of those years numbered 661.

There were many striking incidents in those years of preaching. Once when proceeding to Eston, he encountered a gang of men playing pitch and toss in a field. Moved to appeal to them, he addressed then boldly and finally knelt down in their midst and prayed. One and all were silenced and ashamed and crept away.

Mr. Dickinson has been largely instrumental in the formation of three societies. In November, 1881, he was commissioned to evangelise Grangetown. With a group of children gathered at the time he sang down several streets and held a service in a joiner’s shop. “Oh, that I knew where I might find Him,” was the text of the sermon. A man on his way to the public-house heard the word as he passed the window and was arrested. Entering the shop-church, he listened to the sermon and in the prayer-meeting was a seeker for pardon and peace.

In 1883 he missioned the Newport district of the town, conducting service in the house of Mr. and Mrs. Rogers. In November, 1891, Haverton Hill claimed his attention. The interest of others was aroused in a novel way. The local preachers were surprised to receive an original poetic appeal from Mr. Dickinson. With the help of some Gilkes Street friends the village was missioned and a class formed.

During the last ten years Mr. Dickinson has given himself more particularly to Sunday-school work. The need for lay preachers was not pressing locally, but there was ample scope for Sunday-school teachers. He had been a teacher for thirty-two years prior to this decision. Our friend received some time ago the Sunday Companion Roll of Honour for long service in the Sunday school. He has never been late at school for many years. One Saturday night he found himself at York, too late for the last train home. Nothing daunted he slept in York, was alert early in the morning and had cycled to Middlesbrough in time for breakfast and in time for school. A great number of his scholars from year to year have been converted, and some are to be found in the ministry of Primitive Methodism.

For many years, also, Mr. Dickinson has been a class-leader, and some years ago discharged the duties of Station Steward. Twice he has been honoured by election to the District Meeting, once when the Assembly was at Carlisle, and again when the Synod met at Loftus. This year he was chosen by the District Building Committee as its representative to the Whitby Assembly.

Mr. Dickinson has a distinct gift of prayer and a remarkable power in dealing with inquirers and penitents. He is seen at his best in the Sunday evening prayer-meeting. Few men are able to win others to decision and to lead them in the ways of faith more successfully than he. “The Story of the Revival at Gilkes Street” was from his pen. A great share he took in the practical and necessary work of prayer-meeting persuasion.

Our friend has more than a local fame as a cyclist, and may be seen every day attending to his business on his machine. During the last thirty years he has ridden over 90,000 miles. He has toured in Norfolk, Lancashire, and Cheshire. A hundred miles a day is an easy ride for him.

The cyclists of every class are indebted to him for what is popularly known as “ Coronation Corner.” There was a very dangerous turning for riders at Marton Lane Ends. He determined to remove the peril. Approaching the landowner, it was agreed that twelve feet should be taken from the turning and that 120 yards of iron fencing should be put up. To defray the expenses he collected £78. In the presence of 15,000 people, including the Mayor and Mayoress, the members of the Council, the Parliamentary representative, “ Coronation Corner ” was suitably opened.

A brother cyclist, who had been ill for long, was befriended by Mr. Dickinson. A benefit concert was arranged and the sum of £50 obtained for the unfortunate man.

Two or three years ago Mr. Dickinson was elected to the Board of Guardians and has devoted himself assiduously to the duties in connection therewith.

It only remains to be said that our friend possesses the secret of perennial youth. He has had accident upon accident, having been picked up for dead more than once, and yet he is as lithe and energetic as a youth. Of his love for Primitive Methodism there cannot be a doubt. His heart and soul are in the Church. He is present not only at all the Sunday services but at the week-night meetings. Much time he also spends in visitation. “ Labour is rest” to him.

We have put down the facts without embellishments. The facts tell their own tale. May his life be long continued and his health maintained, and may the years to be be as full of the love of the Church and the service of Jesus as those of the past!

John was born in 1838 at Kirby Knowle, Yorkshire to parents John and Elizabeth. John, senior, was an auctioneer and appraiser. Census returns identify that the family moved to Kirkby Stephen when John was young.

Patterson records that John was converted at Kirkby Stephen on 16 February 1864.

John spent most of his working life as a slater.

Note: The author of the sketch probably means Rev. James Warnes – not Warner in respect of his conversion.