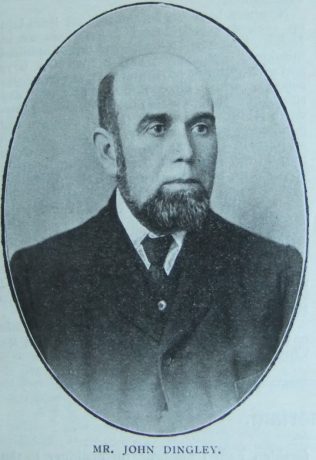 Forty years’ experience as a local preacher is a period long enough to create strength and stability in any life; and in respect to Mr. Dingley these are qualities that he possesses in a striking degree. But that is not all. Our brother is devoted to his own Church and takes an interest in every phase of its life, and he believes that there is no other Church so well adapted for evangelising the world as ours. He was born March 2nd, 1847, at Halesowen, where he has lived all his life. His early conversion opened the way for religious work of various kinds. He has been a class leader for over twenty years and associated with the Sunday school for over forty-three years. Our church at Birmingham Street, Halesowen, has been his spiritual home from the beginning, and he had a hand in the first efforts that were made to build the chapel. He assisted in putting in the foundations and was always glad to become a labourer and wheel away rubbish and help the masons. His father and mother were both supporters of the mission work of Hugh Bourne, and missioned the streets with him. All the early associations of his life are wrapped up in Primitive Methodism, and his point of view to-day, concerning spiritual work, is that of our early fathers and pioneers. He has made his greatest efforts for the sake of our Church, and all the noblest sacrifices of his life have been in her behalf.

His contribution to the life of the Church to-day is an important one. He brings to the Christian Endeavour movement the spirit of a fadeless enthusiasm, and never fails to teach the young the glories of consecrated devotion to Christ and to His Church. He dreams of a time in the near future when the prayer meeting and class meeting will be reorganized and take the place of the Institutional propaganda. Mr. Dingley considers that the health of the Church has its roots in prayer and experience, and that care needs to be exercised lest the roots be damaged by an overcrowding of social attractions.

Our friend takes a large share of work in the municipal life of the town, especially in educational affairs. He has been a School Board officer under the County of Worcester for the last twenty-nine years. He takes an interest in the Men’s Friendly Society and has long been its President.

As a preacher, Mr Dingley takes a first-hand interest in his work. By meditation and prayer he prepares his message and does not depend on dust-laden commentaries for his ideas. He knows our doctrine and is an adept in Scripture knowledge: he always trusts to the Scriptures doing their own work, and his Bible references are interwoven in his message as a gold thread in a precious garment. His sermons are so framed that they are all application, even the introduction. He is sixty years old and is healthy and strong, and there is no doubt but what our brother will retain to the end the traditions of the past and bring into our modern conditions his own confident spirit of faith for grander triumphs over sin.

One other excellent trait in his character is his devotion to the ministry. His home is always open for our preachers, and he is always a supporter of movements that are for the strengthening and uplifting of the hands of the ministry. His hospitality is rooted in “love of brethren,” and his wife shares with him a common devotion to God’s servants and is skilled in the art of homely and tender beneficence. We wish for our brother many years of useful and honoured service in the work of our Church and the spreading of his Kingdom of the Lord.