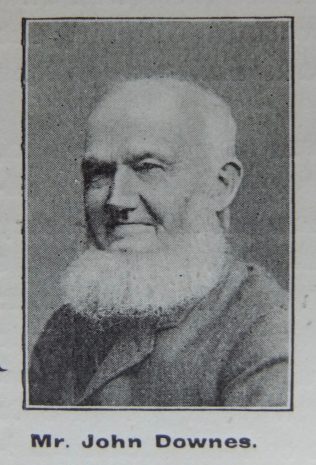 Transcription of Obituary in the Primitive Methodist Magazine by Joseph Ferguson

John Downes, late of Eaton-on-Tern, once in the old Wrockwardine Wood Circuit, was born December 16th, 1821, and so at the ripe age of eighty passed to God, November 28th, 1901. He was born in the large village of beauty called Edgmond, near Newport Salop. His family knew the limited means of a labouring man and the children were daily taught the life-lessons of industry and frugality. His parents were regular attendants at the Anglican Church – the only church they knew – for the light of “Dissent” had not yet entered that village of exclusiveness. God early saved John Moore, the son of a farmer. Pentecost came to the village and at the inevitable noise, the people ran together and among those gathered were the parents of John Downes. Curiosity and soul-hunger incited them and others to attend the services clerically denounced, and some were “turned from darkness to light and from the power of Satan unto God.” He early went to earn a penny and as early went to our services: these were the days of spiritual enthusiasm. He revered John Petty, Samuel Tillotson, and spoke with moistened eyes of others who are among saints which no man can number. With what evident joy he would describe the scenes in services conducted by these holy men of old. His fellowship, and that of John Moore and William

Withington, was an education and inspiration to the writer. John Downes was early converted and he was not more than twenty when he became a local preacher. During the sixty years of his ministry he travelled thousands of miles and led many to the Lord Jesus. He was popular and effective and all our people knew that John Downes, the miller of the old mill, lived in the pavilion of God. His hallelujahs were no empty sound, but came up from the heart governed by its vision of Jesus. We can still hear his “Praise the Lord,” and “Oh, the precious blood of Jesus.” His terminology was Primitive Methodistic and not a mere lingering of a former habit, but the spontaneous uprising of a heart alive in Christ – it was a music that helped to make living hearts dance for joy. His hands, as an official of the church, were always full. For years the Sunday School superintendent, the class teacher, the church steward, the principal trustee and treasurer, and day school helper. He had no apology from over-work; punctual, and conscientious, the members knew where John Downes would be when the clock struck seven, and his singing heart and voice would be felt and heard as they went up the lane to the red-brick sanctuary of God. John had a soul of no common order. He was a happy, sweet-tempered Christian. In the darkest days of life he had a song which was infectious, and cast-down spirits, under his inspiration, climbed into the light and sweetness of God.

John was an intelligent and thorough Free Churchman; he knew no compromise. His principles governed his life; nearly the whole village came under his healthy influence. He respected the parish cleric according to character and spiritual intelligence. He admired a manly man and Christian catholicity he accepted as a sign of life. The official power of the parish “priest” he necessarily recognised, but, his pretence to a spiritual power other true men could not possess, he emphatically rejected.

Painfully feeling the lack of education himself, he successfully agitated for a School Board. His own children and others, who attended our Sunday School, were sneered at and harshly treated in the day school by the clergyman: this was more than John could bear; he consequently withdrew his own children and commenced one in our own school, which, for 36 years:, did a work not to be forgotten. When the School Board was formed, John Downes became a member and vice-chairman, and until two years before his death laboured for the weal of the children. His end came earlier than was expected. He waited for weeks for the coming of his Lord. In the midst of his pain be praised the Lord and said that the river across which he was about to pass “was rock at the bottom.” He told Mrs. Brown, a farmer’s wife, “that he wanted to go.” He had no fear of that for which he was prepared. When the end came he rapped five times on something near his his hand and said, “Take me in,” and he speedily “was not, for God took him.” He was interred in our grave yard at Edgmond, on Tuesday, December 3rd, in the presence of a great crowd, by the circuit minister, the Rev. W.G. Softley, and his death was improved by the writer who knew him long and loved him much.

John was baptised on 19 December 1820, (not 1821 as given above) at Diddlebury, Shropshire. His parents were William and Elizabeth. Census returns identify that John was born at Diddlebury; his wife Sarah was born at Edgmond, and it was there that she was buried.