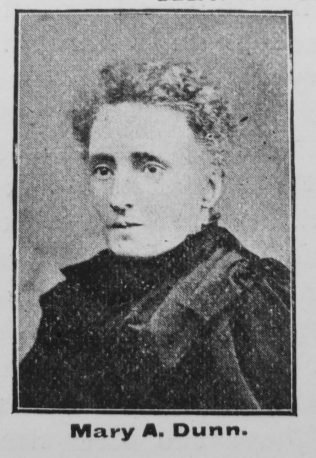 Transcription of Obituary in the Primitive Methodist Magazine by T. Meakin

In the death of Mrs. Dunn, which took place Feb. 11th, 1902, Caledonian Road Church has sustained a loss which is profoundly recognised. There is scarcely a department in its various ministries in which she has not acted a prominent part. Before the erection of the chapel, when the infant church was struggling to its feet, her association with it began. She became a member on the second Sunday of the opening services of the present chapel in April, 1870. From that period to her decease it was the object of her unwaning affection and the congenial sphere of her tireless activity. Her work began in the Sunday school in the infant’s class. Class by class she advanced until at length she found herself at the head of the young women’s bible class, which she conducted for eighteen years. In the public services her place was in the choir, her presence and influence contributing not a little to its stability. In the frequent bazaars for the reducing of debt, as secretary, she played a conspicuous part, and difficult will it be to find one to adequately fill her place. But it was, perhaps, in connection with the Band of Hope, at any rate, of later years, that she was most conspicuous. Wednesday by Wednesday, year in, year out, found her at her post with her husband and children, all infested with the same devotion to the temperance work among the young. She had a remarkable gift for the training of children, and many are the evenings on which a large company has been delighted with their performances under her skilful direction. Mrs. Dunn put her soul in whatever she undertook, hence duty was delight. Instead of pining in the presence of difficulties, she boldly tackled them and invariably overcame them. Her capacity for work was equalled by her willingness. There was about her an atmosphere of eagerness and energy that did and could not but act as a tonic to those whose hands might be showing a tendency to hang down. Not the least amazing thing about her was that she managed to put all this time and work in connection with the school and church in conjunction with heavy demands at home. She had a family of eight children to look after, that are a credit to both her and her husband. How she did it was a marvel. She was healthy, abounding in energy, but was as thoughtful as she was either. There was method in her movements. She seemed to have more time to spare than many who had not half the work to do. She was an illustration of what is sometimes said “That those who do the most, have the most time to do more, while those who do the least have no time for anything.” She might have known that her life-day would not be a long drawn out one and that what she had to do, she had better get it done quickly. What a blow it was when we learned that a malignant disease had selected her for its victim. It seemed so hard after struggling with the bringing up of a largish family that just when they were getting out of hand and able to do something for themselves and so ease the burden and the strain, she should be taken away. Truly the Lord’s ways are not our ways.
“We have but faith, we cannot know
For knowledge is of things we see.”

After some months of keen pain and suffering borne with an uncomplaining that was sweetness itself, she passed away to the “Beyond.” A memorial service was conducted by the pastor, who spoke from the description of a virtuous woman as given in Proverbs xxxi., 10-31. Truly the heart of her husband safely trusted her. She was diligent, frugal and kind. She looked well to the ways of her household and ate not the bread of idleness. Her children arise up and call her blessed, her husband also, and he praiseth her.”

Mary was born in 1854 at Islington, Middlesex, to parents Henry, a labourer, and Mary Ann, a laundress.