Veteran Local Preacher and his Counsels to Preachers 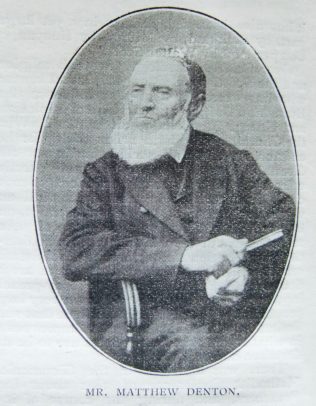 Transcription of Introduction in the Christian Messenger by the Editor

We may be wrong, but we are inclined to believe that Mr. Matthew Denton, of Beverley, is the Nestor amongst our local preachers. He came on the Hull circuit plan as long ago as 1832, so that he has been a local preacher for sixty-eight years. The four series of his ‘Moral and Religious Anecdotes’ were a very creditable and serious essay in authorship, and he has from time to time contributed articles to our connexional magazines dealing with various historical and practical questions. Just recently Mr. Denton has celebrated his eighty-eighth birthday, and received the congratulations of the Beverley Quarterly Meeting, the public press, and of his friends and various fellow citizens. Mr. Denton doubtless feels something of the burthen and disabilities of advaneed age, but he yet takes a deep and kindly interest in all that concerns the Church he has served so faithfully and so long. In proof of this he has just sent us an article on a subject of vital importance; this we give, with only slight curtailment. (See pdf document below.)

Matthew was born on 22 November 1810 at Beverley, Yorkshire.

Matthew was a permanent member of Conference.