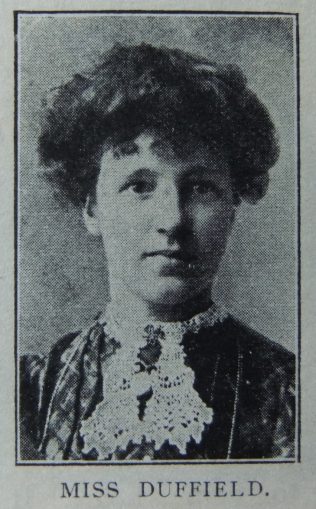 On May 4th, 1909, there entered into the peaceful rest of God, Nellie Duffield, the younger daughter of Mr. and Mrs. Duffield of Chiswick, Richmond Circuit. Trained in a house where religion is the ordinary life day by day, it is not surprising that she very early in life gave evidences of a devout life, and as a child became a disciple of Jesus Christ. Of studious habits, she gathered a good store of religious knowledge, and whilst in her teens became a teacher in the Sunday school. By her ability and winning disposition she gathered round her a group of scholars who were fondly attached to her.

Never absent from her class when it was possible for her to be present, she widened her interest in her work. Though opportunities for reading were of a limited character arising from her vocation as a postal clerk, she yet managed to make herself familiar with the literature of the day, especially such as was helpful to her as a Sunday school teacher. By this means her lessons had a freshness and interest that were markedly effective. As a member of the choir she could be depended upon to be in her place, and ever manifested a sincere and strong attachment to the means of grace, whether on the Sabbath or week-night and used her influence to induce others, especially the young, to be present with her at these services.

When the C.E. Society was formed she was appointed Corresponding Secretary and had the unspeakable joy of having nearly all her scholars give in their names as first members of the Society. Over two years ago a serious break down in health caused anxiety to her family, but it was hoped that by rest and change, health might be re-established. In spite however of all that could be done by medical skill and most loving and devoted service by all the family, the insidious disease – consumption – pursued its course, and the places she had occupied in the choir, C.E. Society and school had one by one to be vacated. Though she loved to serve in all these positions and felt sorely the severance she uttered no word of complaint. To the end she maintained that cheerfulness of spirit which had always been one of her characteristic features.

When no longer able to attend the services of the church she retained her interest in its work and welfare. Her mind was filled with stores of helpful truths which she gathered as sacred treasures, reading choice literature up to the close of her life. At the early age of twenty-five years she has been called to the realms of light and perfect life. The loss to father, mother, sister and brother is unspeakably great and sore, but with heroic Christian fortitude each one was found in the place of service – steward, teacher, librarian – the first Sabbath after memorial service. Life is richer for the influence of our departed sister, who will be long remembered as a devout, intelligent, faithful Christian disciple.

Nellie was born in 1883 at Islington, Middlesex, to parents Isaac and Alice. Isaac was a bookbinder.