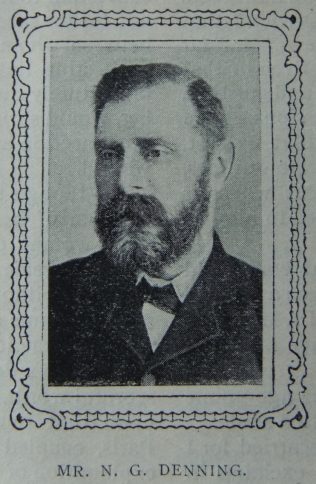 The subject of this sketch may truly be styled a maker of Primitive Methodism. To his zeal, devotion and sacrifice, the Dartmouth Circuit is indebted for the position it holds to-day. He has been a pioneer in the truest sense of the word. He has missioned new places, broken up fallow ground, dropping in the good seed of the kingdom, fostering with much care and patience the tender shoots until fruit appeared, and the joy of harvest was his reward. We have two churches on the Dartmouth Circuit founded in this way, Harbertonford and notably Brixham.

His week’s work over, our brother would tramp out to these places, five and ten miles respectively. Not to churches already established and to congregations waiting with eager expectation for the word of life, but to advertise his mission, to gather his congregation, and, with tremendous passion and emphasis, deliver his message.

His audience was often hostile and Mr. Denning knows what it is to have his sentences punctuated with rubbish and filth of all kinds. Nothing, however, could daunt the intrepid pioneer, who stuck to his self-imposed task with grit and determination, never flinching or yielding to the enemy one inch of ground, but holding his own for Christ and the Church.

For health reasons it is now impossible for our brother to continue the arduous labours of the past. But the desire is still within him. Get Mr. Denning to relate some of his earlier experiences and his eye will kindle, his face become animated, and his voice thrill with the old passion as though he were living once more through the scenes of long ago.

I have not been able to identify a Mr. N.G. Denning in census returns. Can anyone point me in the right direction?