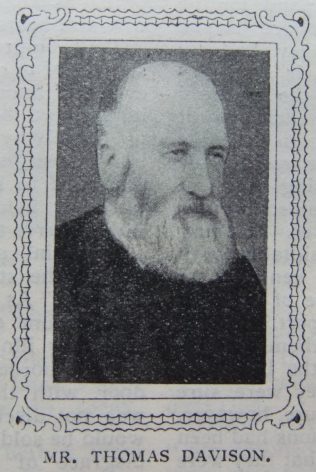 Mr. Thomas Davison is one of our oldest and most respected Class leaders in the Shilam Station.

He is a native of Bamborough in Northumberland, and was born in the year 1840, so that he is now in his 67th year. He was brought into the experience of the saving grace when about 12 years of age, and has been a member of our church for over 55 years. He is indebted to the Sunday school, and especially to Mr. Matthew Richardson for his first religious impressions.

He had only been six years joined to the church when he became a Class leader at West Stanley, and has held that position with few intervals up till now. Some 40 years ago he came to Shilam, and during that time he has been regarded as one of our most earnest and reliable officials.

He became a local preacher in 1861, and has been one of the most successful soul winners among our laymen. It is safe to say he has led hundreds to Christ. As a Class Leader he stands in the front rank for unction and ripe Christian experience. It is good to be present when the old man gets fired up at a class meeting or lovefeast.

He has a fine tenor voice of remarkable power, and can thrill a meeting with his earnest and wise counsel. In prayer he has the secret of success, you feel he is leading you into the presence of the eternal.

He is most welcome in any of our pulpits, and his services are in great demand, but owing lately to failing health he is compelled to restrain his fiery energy. None feels this more keenly than the old man himself.

He now devotes the most of his time to his class members, and we regard him as a Prince in our Israel. He has won the admiration of the entire church as one of the oldest and most efficient Class Leaders in this station.

Thomas was born in 1840 at Bamburgh, Northumberland, to parents Thomas and Elizabeth. Thomas, senior, was a coal miner.

Thomas married Jane Wake (1841-1921) in the summer of 1863 in the Gateshead Registration District. Census returns identify six of seven children.