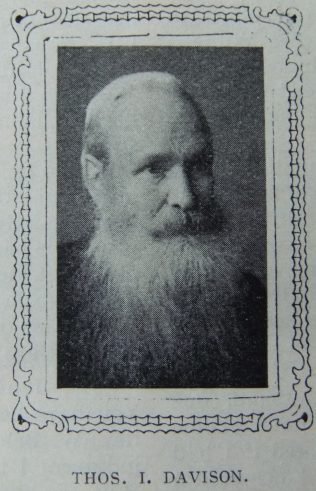 The name of Thomas Ismay Davison is well known throughout the length breadth of Cumberland. Born at Wigton in 1847, he was converted when fifteen years of age.

He at once manifested a keen interest in the class meeting, which has continued unabated throughout the years. His abilities were quickly recognised, and his wholehearted devotion led to his being appointed class leader at the early age of 19. He gave his time and energies also to the Sunday school, and has rendered service in all departments therein. Soon after his conversion, he responded to calls from surrounding villages to preach. His earliest efforts were in reading the lessons at village meetings, but he quickly acquired fluency and power as a speaker, and while still in his teens, became a local preacher, under the superintendency of the late Rev. Adam Dodds. Distance was no obstacle, and only recently our friend, who has passed his three score years, walked eighteen miles one Sunday and preached twice.

Mr. Davison has enjoyed a large share of the confidence of his brethren. He served for 24 years as Branch and Circuit Secretary. He has represented his Circuit in District meeting, being delegate to the first meeting, held at Penrith, of the Carlisle and Whitehaven District. For many years he was secretary to the Trustees, and on the Total Abstinence platform has been much in demand. In the welfare of his town he has taken deep interest, and has seen service on several public bodies. In all these branches of work, our friend has been ably seconded by his wife, who recently passed to the Higher Life.

Thomas was born in 1847 at Wigton, Cumberland, to parents George and Susannah. George was a boot and shoemaker.

Thomas worked as a watchmaker.

Thomas married Betsy Cubby (abt 1851-1909) in the summer of 1870 at Wigton, Cumberland. Census returns identify three of four children.