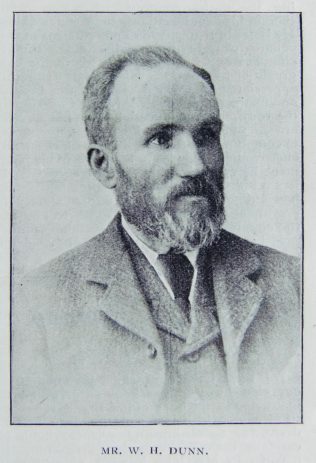 Transcription of Sketch in the Christian Messenger by Ralph Shields

MR. DUNN is one of the stalwarts of Primitive Methodism, and has for well nigh half a century filled the honoured and useful position of local preacher. By his high character, his excellent gifts, and his loyalty and devotion to his church, he richly deserves a place among “local preachers worth knowing.” He is the last man to desire such prominence, but it is such men who are most worthy of being recognized and honoured. He was born in South Shields on March 21st, 1844, and for nearly forty-three years has been a faithful and successful preacher of the Word. In this he is in the true succession, as his father was also for many years a local preacher in the South Shields Circuit. Unfortunately Mr. Dunn’s parents were in such humble circumstances as to be unable to give him a liberal education. They however resolved that their son should not be handicapped in life for want of a trade, and notwithstanding that they much needed the larger wage he could have earned in labouring or general work, they by heroic self-sacrifice carried him through his apprenticeship as a plumber. It is little wonder therefore that Mr. Dunn holds them in such loving memory. Apart from this he had scarcely any other early advantages, and his attainments both intellectually and socially are the outcome of his own inherent qualities, and of honest patient endeavour in climbing the ladder of life.

In the old Glebe Sunday school he passed through the various stages of scholar, teacher and officer. For some years he filled the position of secretary, but it was in a revival at Heugh Street Chapel he surrendered his young life to Christ and became consciously saved from sin. The services were conducted by Mr. John Faid, who at that time was a local preacher in South Shields Circuit. Mr. Faid still fills the position of local preacher, and has for a number of years served our church at Greenock with much success.

Mr. Dunn gratefully acknowledges his obligations to some of the early local preachers in the South Shields Circuit, such as John Anderson, Richard Bulmer, George Bird and Alexander Thompson. He reveres the memory of these noble men, and rejoices that it was his lot to be under their tuition and guidance. Fifty years ago there existed in the town a working men’s institute, with reading room and circulating library. This was the only institution that offered any facilities for working men, and Mr. Dunn availed himself of all the privileges it gave to thoughtful young men.

In the course of the years he has read widely on many subjects, but works of a scientific character have had special attraction to him. Geology and chemistry have been his two favourite subjects, and to them he has given a life-long study. For three years he was teacher of a class, under the board school, in which the theory of plumbing was taught. The class met in the evening, and in connection with it he had to give a course of lectures of a technical character.

Many years ago the editors of the Plumber and Decorator offered a prize and certificates for the best paper on plumbing. One thousand papers were sent in, and Mr. Dunn secured a place among the first eight, and was awarded a certificate with the words added “Ably written and highly commended.” Mr. Dunn has been successful in business and has now a place among the leading plumbers in the town, and is well known as a conscientious and honourable business man who hates shams and superficialities. His name stands as the synonym for all that is upright, just, and true.

As a loyal Primitive Methodist he is interested in all its movements, and is a most generous supporter of both its local and connexional funds. He receives into his home the Quarterly Review, the Aldersgate, and other Primitive Methodist publications. He is a trustee of several chapels in the Circuit, and has taken a deep interest in and liberally subscribed towards the beautiful new church which has just been built in the part of the town in which he resides. It is, however, as a local preacher that he is specially to be regarded.

In preparing for the pulpit and in discharging the duties connected therewith he is thoroughly conscientious and painstaking. He is faithful to all his appointments and is equally ready to fill the pulpits of the smaller churches as to occupy those where the congregations are large. His ministry is highly appreciated in every society in the Circuit, and in the pulpits of all the Free Churches in the town. The applications for his services are so numerous that he finds it impossible to comply with them all, though he cheerfully endeavours to supply those where in his judgement he can be of the greatest service. He has a high ideal of the preacher’s office, and has strong convictions of a man’s duty to prepare and preach his own sermons, and not to commit and recite the productions of other preachers. Not less strongly does he condemn the practice of repeating the same sermons in the same pulpit. To be successful a preacher must be constantly growing in knowledge, in grace, and in general fitness for his work, and if he is, he will discover that he cannot repeat again and again the sermons he prepared years ago. Originality, individuality and freshness are, our friend believes, absolutely essential to pulpit power and efficiency. Mr. Dunn has the joy of knowing that his efforts have been appreciated and that they have been successful in the highest sense in building up the church and in the salvation of men. As a preacher he has given attention to theology, to history (ancient and modern), and to biography. His sermons are orderly arranged – careful attention being given to exegesis. In all his preaching he seeks to exalt Jesus Christ, to inform the intellect, to arouse the conscience, and to awaken desires for a better life. He is secretary to the Preachers’ Examining Committee in his own Circuit, and is deeply interested in the young men who have to appear before the Committee. In his home life he is specially happy, as ministers and others who enjoy his hospitality can testify. His devoted wife heartily seconds all his efforts, and their only daughter is a delight and joy to them. The church of Christ is greatly indebted to such men, and the lay ministry will always be held in honour as long as such capable and successful preachers are associated with it.

Birth records identify that William was born in 1845 at Sunderland, Co. Durham, to parents George, a joiner, and Elizabeth. He was baptised on 2 May 1845 at St Peters, Monkwearmouth. The family moved to South Shields when William was young.