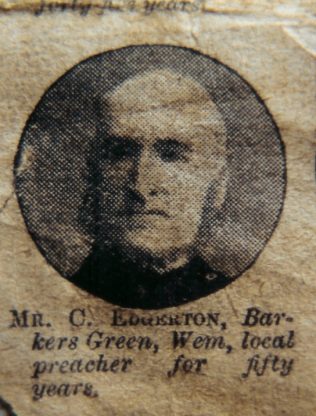 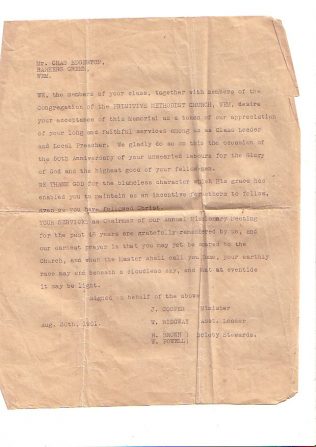 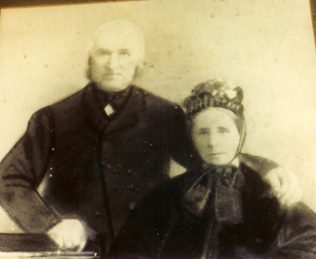 18 June 1852, Charles Edgerton married Elizabeth Maddox at Chapel Street Chapel, Wem, Shropshire according to the Rites and Ceremonies of the Independents, Joseph Pattison was the Minister and Richard Edgerton and Sara Sharps were witnesses. All parties signed the register. Charles was a brickmaker living at Barkers Green. Elizabeth also lived at Barkers Green, daughter of Samuel Maddox, brickmaker.

September 1862 – Charles is probably mentioned at the September Quarterly Meeting of the Prees Green Circuit when it was resolved that:- “the friends at Wem have liberty to raise money to build a new chapel, and that this meeting pledges itself to render them all possible assistance and that the following persons be a committee to carry this out:- T. Rogers, W, Powell, T. Hall, B. Deakin, W. Eccleston, C. Edgerton, W. Morris, S. Morris, M. Bennett and J. Goodwin” [page 114- “A History of the Methodist and United Reformed (Congregational) Societies in Wem” by Patricia and Thomas Edwards 1995]

30 August 1901 – CHARLES receives a certificate to commemorate his 50 years as a Class Leader and Local Preacher at Barkers Green, Wem. He also received the “Sunday Companion” Distinguished Service Medal. He was also Chairman of the Annual Missionary Meeting for 48 years. [Certificate]

4 June 1902 – At the Wem Circuit Quarterly Meeting it was “resolved that it is expedient to increase the number of Trustees to twelve and the following Trustees being willing to continue in the Trust – namely Charles Edgerton, and the following having, with other been duly nominated at a meeting held for that purpose on the 9th day of February, 1902.” [page 125 – “A History of the Methodist and United Reformed (Congregational) Societies in Wem” by Patricia & Thomas Edwards 1995]

I have a Primitive Methodist book of his marked with his name and the year 1888.