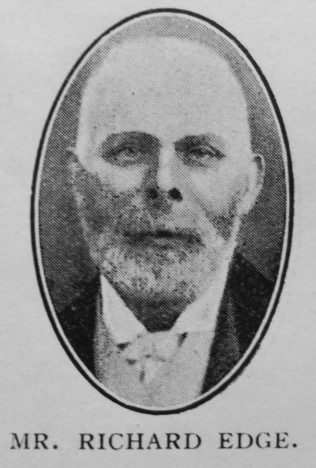 Few churches have been more signally blessed and enriched with a succession of men distinguished for their eminent piety, their whole-hearted devotion to God and zeal in His service than our church at Wednesfield. The names of Wootton, Evans, Cooper, Hadley, and Edge stand for what is brightest and best in our Church’s life, and are lovingly cherished and revered as a precious memory. These living links with the past are being rapidly severed, and on February 3rd we felt that we had lost a venerable father, a kind friend, and a wise counsellor when Richard Edge was taken from us.

Born in 1838, his whole life may be said to have been built and lived in our Wednesfield Church. As a boy he was a scholar in the school—became a teacher and for many years was superintendent. A man of sterling character, his deep religious convictions, his moral integrity and untiring industry inspired confidence and commanded success. As a business: man he was held in high repute, not only in England, but on the Continent, as was evidenced by the  splendid tributes that were paid to his memory from the many firms with whom for years he had had business relations.

Although a busy man with the cares and anxieties of a large business pressing upon him, his interest in the Church grew stronger and became the ruling passion of his life as years came upon him. He loved his church beyond expression and found his greatest joy in its service. His purse was always open, and he never wearied in giving to its various funds and institutions.

He was an ideal father and an ever ready helper of the poor. We shall all miss him, but we thank our Father in heaven, for the beautiful life he lived, and look forward with joy to a glad reunion,

Richard was born in the summer of 1838 at Wolverhampton, Staffordshire, to parents Samuel Edge, a stone miner (1841), and Mary Rogers.