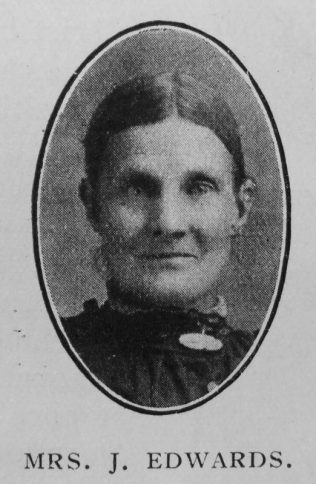 Transcription of obituary published in the Primitive Methodist Magazine by W.C. Ball

It is with more than a passing sorrow that we chronicle the death of Mrs. Jane Edwards, the beloved wife of Mr. Thomas Edwards, of Walsall Wood, in the Lichfield Circuit, who passed away, after a brief illness, on September 21st, 1911, at the age of seventy-one years. Born near Clun, in Salop, at the age of twenty-six our friend accepted Jesus Christ as her Saviour, and from that day onwards, except for five years, when living remote from a Primitive Methodist Chapel, our sister maintained an unbroken connection with our own Church

During the last thirty-eight years of her life she was a member with us at Walsall Wood, and though she occupied no official position in our Church, her attendance at its services was very regular, and her interest in all its work deep and practical. Quietly and steadily she let her Christian light shine, and so completely did she win the hearts of her fellow members, that during her last illness there was scarcely a service at Wallsall Wood at which she was not mentioned in public prayer.

When she knew that her days were numbered, she waited with patience for her change to come, her mind divided by reminiscences of the past and anticipations of the glory soon to be revealed. And thus, calmly and quietly, she fell asleep, to wake where pain and death shall be no more. Her remains were interred in the Walsall Wood Cemetery in the presence of a large number of friends. The service was conducted by the writer, who also preacher her memorial sermon on October 15th.

Her husband, who is much respected, remains to mourn his loss, while two of her sons hold an honoured place in our official life. To all the members of her family we tender sympathy.

Jane was born abt1840 at Clunbury, Shropshire, to parents John, who worked the land, and Jane.