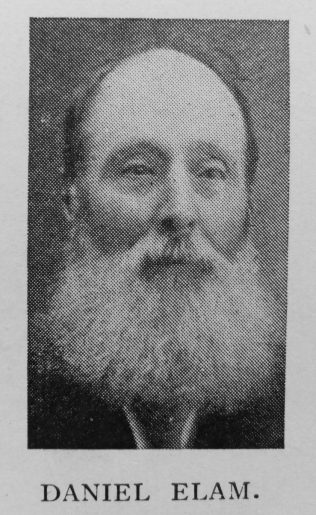 The late Mr. D. Elam was one of the many gifts of rural Methodism to city churches. He was born sixty-seven years ago near Spalding, where he was early introduced to the toil and privations attendant upon agricultural life, for at the age of seven-he was sent to work in the fields and his wages were threepence a day. When he was nineteen he was converted among the Free Methodists, with whom he nurtured his spiritual life and exercised his gifts for eleven years.

Then he removed to Guisborough and joined the Primitives, enjoying fellowship with the Revs. G. Parkin, B.D., and H. Pratt. Nine years later he came to Manchester, and at once threw in his lot with Higher Ardwick Church.

Establishing a greengrocery business, he quickly won success and gave liberally as God prospered him. He belonged to the “old school” and dearly loved the class meeting and open-air evangelism, while the old doctrines delighted his soul. Gaining a respectable competence, he retired from business several years since. Ten years ago he and his wife toured the Antipodes in search of health. He greatly enjoyed the brief spiritual fellowship he cultivated with our brethren over the seas and counted it no small honour that he was chosen by them as the representative of the Colonies to the Sheffield Conference. He was also a delegate to the Grimsby Conference.

Five years ago he lost his life partner, but now they know the bliss of re-union. He battled bravely against an insidious disease for nearly twenty years, but succumbed on January 17th. We laid him to rest in the Southern Cemetery amid many tokens of sorrow and respect. Memorial services were conducted at Higher Ardwick, Napier Street, and Rose View, by the Revs. A. Wilkes, E.A. Steen, and Mr. J. Berry respectively.

Daniel was born abt1843 at Moulton, nr Spalding, Lincolnshire, to parents Joseph, who worked the land, and Ann.

He married Sarah Bowers (abt1840-1906) in the summer of 1867 in the Wisbech Registration District, Cambridgeshire. Census returns identify four children.