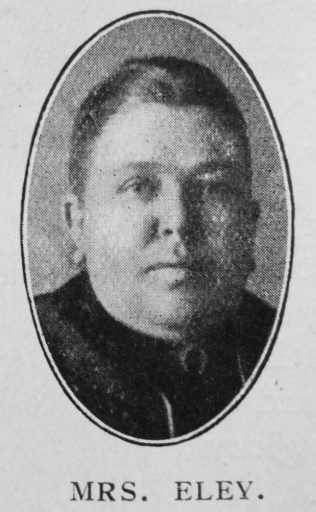 Transcription of obituary published in the Primitive Methodist Magazine by T.P.

Mrs. Eley was born in 1849 at Filkens, in Oxfordshire. In her earliest days she was attracted to the Primitive Methodists and their services. On December 21st, 1871, Mr. R. Eley and she were married. They were both converted after a religious service in their own home. Mrs. Eley welcomed into her home ministers and lay preachers. Although she had seven children and the income only thirteen shillings per week, she was always ready to give liberally to the work of the church and assist her needy neighbours.

Removing in 1897 to Tooting, they joined our people. In service, sacrifice and life she was an ideal Christian lady. In her home fellowship, prayer and class meetings were frequently held.

In December, 1911, she was taken ill and gradually became worse. During her illness her thoughts were frequently with the Lord’s people. She died on Thursday, May 2nd, 1912. Her closing hours were peaceful, quiet and triumphant. A memorial service was  conducted by the writer.

Ann was born in 1849 at Filkins, Oxfordshire, to parents Alfred, a carpenter, and Fanny.

Before her marriage (1871), Ann worked as a general servant at Park Farm, Lambourn, Berkshire, where Robert Eley was a farm servant.

Ann had one child before her marriage.