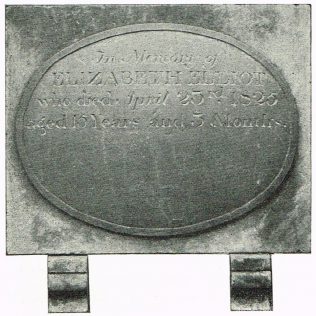 In 1823, William Doughty, a Primitive Methodist missionary arrived in Oswestry. On 8 June, when he took his stand at the Bailey Head, opposite the Red Lion, and began to preach, Elizabeth Elliot was among the crowd who heard him. When the constable arrived and told him to stop he carried on regardless, so he was arrested, and his imprisonment made more impression than his preaching.  As he was carried off to Shrewsbury, to begin his prison sentence of a month’s hard labour, he told the crowd gathered in the Salop Road that they would soon see him back again.

True to his word, he returned singing a hymn, and Elizabeth and her mother were waiting for him. Services began to be held in the Elliot house, and Mrs Elliot and her daughters provided hospitality for the preachers, who often had to stay overnight. It is said that Elizabeth also helped with the singing, as she had a sweet voice.  It was the following year, at a service at Pant, Llanymynech, taken by Thomas Mullock, that Elizabeth had her own life changing experience of the love of God. She became a preacher, known for her short but powerful sermons!

She took her responsibilities as a local preacher very seriously, and tried never to miss an appointment.  On Sunday 24 April 1825 she was planned to preach at Llandrinio, in Montgomeryshire, about 9 miles from Oswestry. The distance meant that she had to set out the day before, leaving home after lunch on the Saturday.  Elizabeth stopped for tea with a Primitive Methodist family at Pant, before taking the ferry boat across the River Virniew.  The river was much fuller than usual, swollen by rains which had flooded down from the Welsh mountains, and as she stepped into the boat she said to her friend, ‘Pray for me’.

There was a chain across the river to stop the cattle from straying. Instead of crossing below the chain, the boatman foolishly tried to cross above stream. The force of the water threw the boat violently against the chain, the boat capsized, and Elizabeth and the ferryman’s wife were drowned.

Elizabeth was only 15 years old.  A tablet in her memory was put up in the Primitive Methodist chapel in Oswestry.

Transcript of Extracts from the Memoir by R Poulter

‘Elizabeth Elliot was born in Bristol in 1810. Her affectionate mother removed from Bristol when Elizabeth was only eight months old. She took ship, with her two children for London; but met with such tempestuous weather, that the mariners as well as the passengers were at their wit’s end. After being tossed to and fro for several days, land appeared; which filled them with joy, they hoping it was the desired haven; but to their no small surprise, it proved to be a port in South Wales. The poor afflicted mother left the ship, and went out, hardly knowing whither she went; but Providence at length directed her steps to Oswestry, where she set up the millinery business, and has resided there ever since.

Elizabeth at an early age attended a Sunday School; and that with such diligence, as not to be wilfully absent for about five years. The books given her for diligence and good conduct were numerous. She was also a good attendant on the means of grace at the Calvinist chapel, where her tender mind was often wrought on. She often told me how she had been animated with the sound of Jesus’ name, and particularly at the mention of his death and sufferings. Also she possessed good morality.

In 1823, William Doughty, Primitive Methodist preacher, came to mission at Oswestry, and preached at the Old Bailey. Elizabeth heard, but with little or no profit. But on his being taken up, and sent to Shrewsbury Jail for preaching, her soul was much alarmed. And on his being liberated, she continued to hear the gospel, delivered by him and other ambassadors of the Lord Jesus. Her mother took in the preachers, which was rendered a blessing to the whole family.

At this time Elizabeth knew nothing of being born again, of remission of sins, and of having the love of God shed abroad in her heart. But in 1824, when Brother Mullock was holding service at Pant, she being much affected, cried to the Lord for mercy; the Lord quickly spoke peace to her precious soul; she was enabled to believe and rejoice in the God of her salvation. She felt the direct and immediate witness of the Spirit of God bearing witness with her spirit that she was a child of God. From this memorable time, she maintained an unshakeable confidence in the God of her salvation; and to the day of her death, she grew in grace and in the knowledge pf our Lord and Saviour Jesus Christ.

From the time of her being thus born again, her love to precious souls was almost indescribable. Her soul was full of burning zeal for the glory of God, and it was not long before she made good use of the talents the Lord had given her. Having received a divine commission from above, she went out, with undaunted courage, into highways and hedges, to compel sinners to come in, that her heavenly Father’s house might at length be filled with blood washed souls. The word of the Lord abundantly prospered in her hands; so that her labour of love was not in vain in the Lord. Through her instrumentality God raised up many living witnesses, who can declare that God, for Christ’s sake hath power on earth to forgive sins. She has left behind many mourning seals of her ministry, which are indeed, “Living epistles, read and known of all men.” She was an excellent speaker’ generally short; but very powerful. She preached the gospel with the Holy Ghost sent down from heaven. A great influence generally attended the word that dripped from her lips.

She bore a high character among all who knew her; and especially among those she was joined with in church fellowship. I never knew her to neglect her class, except she had an appointment at a distance. She always gave the leader a full and clear account of the state of her mind, together with the Lord’s dealings with her. Her experience was sound and edifying. In conversation she spoke little, except she was asked of the hope that was in her. In such cases she spake freely, and her conversation was in heaven. Her words were with grace, seasoned with salt ministering grace to the hearers. She was adorned with a meek and quiet spirit, which in the sight of God is of great price.

At the beginning of her pious course she had to endure much persecution; but as her day was, so was her strength.’

‘Saturday, April 23, a little before two o’clock, she set out for her appointment. When she had got four miles on the road, she heard a voice from heaven, loud and clear, which said twice, “Come to glory, come to glory.” She answered, “I am coming.” And turning herself round, she saw no person. When she came to Pant, she stopped to take tea with one of our friends, and related what she had heard. The same friend accompanied her to the water which she had to cross. Elizabeth’s last words on going into the boat were, “Pray for me.”

The boatman got the boat improperly above a chain, which stood as a fence for cattle. The violence of the stream drove the boat against the chain. Elizabeth was at once hurled into the water, and in a few minutes was drowned. This was on Saturday evening, April 23, 1825.

About half past eleven o’clock that night, being at her mother’s house, I was, all on a sudden awakened out of sleep, and informed that Betsy was drowned. I instantly arose, but scarcely knew whether it was a dream or a reality. The piercing cries and screams made my flesh to chill, and my bones to seem as if out of joint. The cries and confusion made me think of the judgement being set; poor sinners awakened at midnight and lost.

I with many others was some time holding and comforting her dear mother and sister; one of whom was in fits, which came on in quick succession. – Oh! What a night was this!

About four in the morning many of us went to seek the body. But while the elements raged we had little hope. Hundreds were with us at the water side, seeking the lifeless clay, all overpowered with sorrow. We sought till six o’clock on Monday evening, when the body was discovered. But the coroner did not arrive till Tuesday about five o’clock. After this we brought her home, hundreds came to see her remains. Her corpse was beautiful in death. On Wednesday she was interred at Oswestry. Many hundreds attended. I read the funeral service. We then sung, and Brother Doughty gave a most solemn exhortation: we them proceeded in singing and prayer, which had a lasting effect on the minds of the people. May 15, I preached her funeral sermon to many hundreds of people. It was a glorious time. Many were in deep distress; and two, I believe, were brought into liberty.

Elizabeth was fifteen years of age on the 6th of January, 1825. Now Reader, take warning, and deliver thy own soul. Watch and pray. And may God help you and me to follow her, as she also followed Christ.  R.P.

The river she had to cross was greatly swelled by the floods from the mountains in consequence of the rains. There was a chain across the river to keep the cattle within bounds. The boat should have crossed below the chain, but unhappily the ferryman run it above the chain; and when it was a considerable distance from the edge, the force of the current carried it rapidly against the chain and upset it. There was in the boat Elizabeth Elliot, with the ferryman and his wife and another man. Elizabeth and the boatman’s wife were both drowned’ but the men escaped.  T.W.’