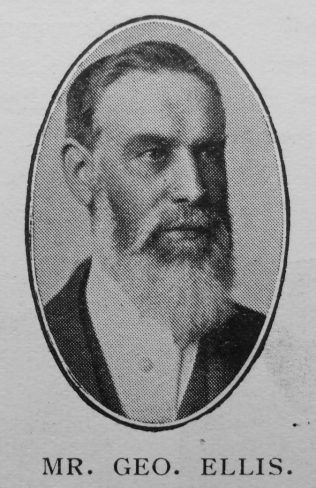 Transcription of obituary published in the Primitive Methodist Magazine by E. Hancox

The Primitive Methodist Churches in Hull and District have lost a generous supporter in the late Mr. George Ellis, who passed away November 30th, 1910, in his 75th year. Born at Halsham, in the Partington Circuit, March 21st, 1836, his parents were members of the Primitive Methodist Church, which worshipped in a cottage in his native village, until ultimately land was secured and a chapel built.

In 1858 Mr. Ellis was united in marriage to Jane Hopper, who proved to be a true helpmeet to him. In 1859 they removed to Hull, and he became a teacher in the Sunday School and a member of the Society at Jarratt Street. Afterwards he joined Holderness Road Society, where he remained for thirty years, and for a long time was the beloved superintendent of the Sunday School and a Class leader.

He continued faithfully to discharge his duties after he removed to Anlaby Road, in the west end of Hull, until feeling the strain too heavily he transferred his membership to Bourne, in the Fifth Circuit, and became a Class leader.

It was chiefly through the advice of Mr. Ellis that the late Mr. W. Norman left over £3,000 to Bourne. When the Norman Memorial Church at Hawthorn Avenue was built he became a trustee and treasurer, and gave generous help to that Church and others in the district.

Quiet, courteous, methodical, and winsome, he was greatly loved. When he passed away, his widow received from ministers and laymen high tributes to his work and worth. His remains were interred in the little churchyard at Halsham in the presence of many friends; Revs. E. Hancox, W.T. Cole, and the Vicar taking part in the service. The writer conducted a memorial service in Hawthorn Avenue Church. “He being dead, yet speaketh.”

He married Jane Blenkarn Hopper (1836-1917) in late 1858 in the Patrington Registration District, Yorkshire.