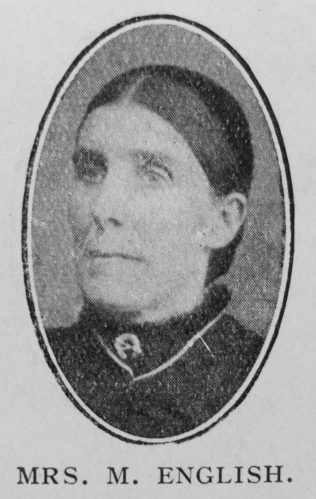 Transcription of obituary published in the Primitive Methodist Magazine by J.J. Hudson

Mrs. Martha English was the beloved wife of one of our most devoted Local Preachers in the Rhondda Circuit. She ably seconded the efforts of her husband in the good work to which he had set his hand. A native of Kingswood, Bristol, she migrated at an early age into the Welsh valleys, and married while at Machan, near Risca, the husband who mourns her loss. She removed into the Rhondda Valley about thirty-three years ago, and became closely associated with the Pentre Society, where her spouse was Class Leader and Local Preacher.

She was most faithful in everything that related to the work of God, and was scarcely ever absent from the means of grace. For a long time she had been in failing health, and on January 29th, 1911, she passed away after a brief but painful struggle. To all who visited her she gave the blessed assurance that she was “going home to be with the Lord.” She was interred at Treorky cemetery on Feb. 2nd, and a large concourse of friends assembled both at the chapel and graveside. May those left behind be granted a blessed reunion with her when “the day breaks and the shadows flee away.”

Martha was born in 1838 at Kingswood, Bristol, Gloucestershire, to mother Sarah English. She was baptised on 11 November  1838 at Holy Trinity, Bitton, Gloucestershire. Sarah married James Reese, a labourer, in 1840.

Before her marriage Martha worked as a cotton spinner (1861).