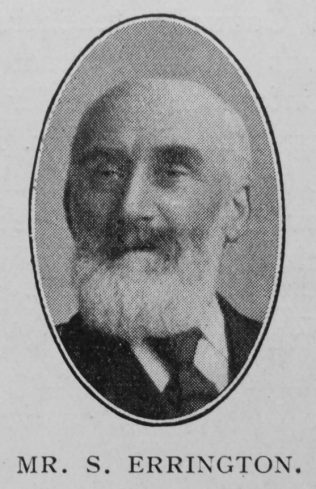 Transcription of obituary published in the Primitive Methodist Magazine by R.H.

Stephen Errington was born at Annfield Plain in 1835, and in early life found the Saviour. Immediately he began teaching and preaching. Soon after his marriage, removing to Mickley Square, he took a prominent part in the erection of the chapel, of which he became a trustee. At Addison Colliery, Blaydon -on- Tyne Circuit, he took an active part in securing a room in which to hold religious services. He became a class leader, teacher, and local preacher.

No name is so fragrant amongst the older inhabitants of this village as that of our brother. He bore an irreproachable character, and was a man of great faith and full of the Holy Ghost. He had great power in prayer and touched the hearts of many with his fervent supplications. Some four years ago he was fortunate in securing one of the miners’ cottages at Ryton, and here he spent in peace and comfort the declining years of his life. He joined the Crawcrook society, the services of which he regularly attended. He died on June 7th, 1912, and was interred on June 11th. On Sunday, July 7th, the writer conducted a memorial service.

Stephen was born in 1832 at Annfield Plain, Co. Durham, to parents John, a miner, and Mary. He was baptised on 9 March 1832 at Lanchester, Co. Durham.

Note: Records give an earlier birth date than the obituary.