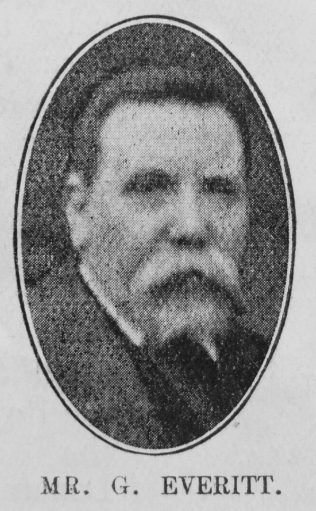 Transcription of Obituary published in the Primitive Methodist Magazine by J.P. Langham

Amongst the men who have made Primitive Methodism a power in London George Everitt must be reckoned. Intimately connected for thirty-five years with the official life of Caledonian Road Church his influence went far beyond it. He was one of a band who did much to extend our Church in North London, and he took a full share in founding Dartmouth Park, Woodbury, and Highbury Vale Societies. Walking miles, holding three open-air meetings, and returning home between services for food was a common day’s work, and it was a delight. He was a devoted class leader, conscientious, punctual, and diligent. He heartily supported all the services of the sanctuary, and the ministers always knew he would be at the post of duty.

He nourished his soul on the deep things of God. Perhaps his light shone brightest in his own home and among his workmates. Morning found him astir at five o’clock and evening was devoted to wife and children. He was a happy man and full of praise. During his last ten years his suffering wife received devoted care and attention. With the tenderness of a woman and the skill of a nurse he strove to alleviate her lot, and today widow and children hold his name in perpetual honour. An adopted daughter, taken into the family a babe, and when his own children were still small and his wages not large, mourns his loss. Mr. and Mrs. Everitt never regretted their adoption of this little one of the Master’s, for nothing but good came of their self-sacrifice. His children were respectably reared and attained honourable places in society. His sons are men of character and earnest Christians; his daughters happily married to Christian husbands. His transparent goodness won the esteem of his workmates, and at his funeral many of them gave audible approval to the eulogy spoken by Rev. Joseph Dinnick. Though increasingly infirm through asthma he continued at work to a few days before his death.

“I should like to go,” he said to his wife, “were it not for leaving you and the children,” and soon after went to be “for ever with the Lord.”

George was born abt1842 at Bristol Gloucestershire, to parents Thomas, a coach wheeler (1842), later a wheelwright, and Ann. He was baptised on 9 January 1842 at St Mary Redcliffe, Bristol.

George died in early 1909 in the Islington Registration District, Middlesex.