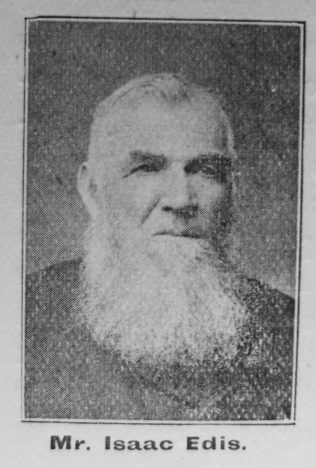 Transcription of Obituary in the Primitive Methodist Magazine by Jesse Ashworth

Mr. Isaac Edis was born at Farcet, a village three miles from Peterborough, March, 1824, and died at Dogsthorpe, two miles from the ancient city, May 3rd, 1902. Being favoured with godly parents, he was led to an early decision for Christ. His eldest brother was a local preacher on the Peterborough plan so early as 1840, and Isaac soon after followed his brother’s example. We have often heard him mention, with deep affection, the names of such early ministers as William Kirby, Thomas Thomas, Robert Eaglin, William Freear, R.W. Burnett; and refer without mourning to the long journeys of those early days without the aid of tricycle, motor car, or even horse-hire fund. To write a biographical sketch of our departed friend would be little less than to give a history of Primitive Methodism in this locality.

Mr. Edis found a true helpmate in Miss Lee, the only daughter of Mr. Robert and Mrs. Lee, whose father and mother both rendered invaluable service to the cause at Peterborough. No wonder such loyalty and persevering devotion to the cause in all its stages by Mr. Edis should be crowned with such extensive and so long continued official position. He was superintendent of the Sabbath School, society steward, class leader, local preacher, trustee for a number of chapels, and circuit steward for nearly fifty years. He was elected to represent his circuit on many occasions at the district meetings, and fifteen times was elected to represent his district in the Annual Conference. Mr. Edis was far from limiting his services to official life; there is scarcely a place in either circuit in which he did not feel and evince the deepest interest in its prosperity, by his presence and aid to memorial stone layings, church and school openings, and not unfrequently their anniversaries. He gave the land for the village chapel, school, and class-rooms where he resided, and also the valuable site for Cobden Street, the head of the second circuit. During the past forty years the number of suitable village and commodious city chapels have risen from four to twenty-six, to most of which he has cheerfully contributed and often led the way.

Not only did he thus take a deep interest in the erection of chapels and Sabbath Schools, but also in the reduction of their debts. Eighteen years ago, in connection with the writer, he took a prominent part in celebrating the Jubilee of Primitive Methodism in Peterborough, by originating a Chapel Loan Fund, which has already secured the reduction of chapel debts to the amount of over £2,000, and nearly another thousand in the course of liquidation; eight chapels have been already entirely freed from liability, and the fund is still undiminished. It is further highly gratifying to state that Mr. Edis was not only a conspicuous man in his own circuit, but it may be said of him that he was truly a connexional man. Many a memorial stone beyond the limits of his own circuit bears his honored name. On one occasion he went seventy-six miles to lay the top stone of a London Chapel. His interest in African Missions was manifested by the regularity of his training the Sabbath scholars for a Juvenile Missionary Meeting. He was an honorary member of the Itinerent Preachers’ Friendly Society; a contributor to the work of the Revs. T. Jackson and J. Flanagan; a constant supporter of connexional literature – for forty-four years taking all the magazines, without requiring to be asked at the end of the year if he would continue to be a subscriber. Did most of our officials and members follow his example in this respect, there would be no complaint of diminished circulation. He was an early contributor to that youngest but most important connexional institution, the Church Extension Fund.

In addition to church work, Mr. Edis took an interest in public affairs, being for sometime on the Board of Guardians, and a member of the County Council, the last two elections to each going in unopposed.

After fifty years of happy marriage union the golden wedding of Mr. and Mrs. Edis was joyfully celebrated by a large gathering in the New Road Church, on which occasion a portrait of each and a beautifully illuminated address were gratefully presented to them by the friends of both circuits, accompanied by the warmest congratulations and best wishes for their future happiness. But, alas! how uncertain are all things in this earthly life of ours. Not long after this golden celebration was the clear lady taken from the scenes of earth to the New Jerusalem above. This great and unlooked-for trial was borne by our friend with becoming resignation to the Divine will. After several years of lonely widowerhood he united in a second marriage with a pious and devoted Christian lady, who is now left to mourn her loss, but truly conscious of his eternal gain.

Mr. Edis had every reason to be deeply grateful for a long continued course of health, till about three years before his death, when rather failing health set in by an attack of rheumatism and something like a paralytic stroke, which but very briefly prevented him from his duties as Guardian, Councillor or in the Sabbath School. Up to the night of his death no particular apprehension was apparently felt by either himself or others. The last two evenings of his lengthened and useful life he finished by the reading of the one hundred and nineteenth Psalm, and before morning, was translated to the Plains of Light. How sudden! And yet how safe! The funeral took place in the Peterborough Cemetery, on Wednesday, May 7th. A very impressive and largely attended service was held in New Road Church, conducted by the Rev. T. Price, superintendent minister, in which the Revs. R. Church, J. Davidson, J. Ashworth, G. Cook, C.H. Lightfoot, and H. Carden took part. The last-named minister came from London, appointed by the District Meeting, to represent the high esteem in which the deceased was held. The twenty-four bearers who took their place at the coffin, in four relays, were mostly local preachers. The hearse was followed by five mourning coaches, containing the widow, Mrs. Edis; the only son, Dr. Edis, of Liverpool, and family; with other relatives and friends. It was said in the Peterborough Advertiser to be the largest Nonconformist funeral which had taken place in the city for the past eighteen months.

Isaac was born on 14 March 1824 at Farcet, Huntingdonshire, to parents Edward Edis, a farmer, and Hannah Robertson. He was baptised on 30 May 1824 at Yaxley Presbyterian Chapel, Huntingdonshire

Isaac worked as a farmer.