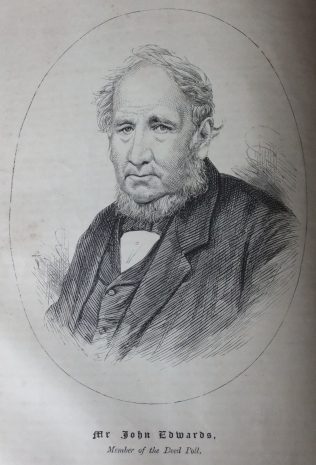 John was converted circa 1822 and within 3 months appeared in the plan as a local preacher, a position he held for 62 years.

When the Primitive Methodist church in Kington was nearly extinct, owing to the severity of persecution, John prevailed in the Quarterly Meeting not to take it off the plan, volunteering to go there himself and conduct a camp meeting, which he did and from that day Primitive Methodism took hold of that place.

John moved to Kington in 1828, established himself in business (as a wool merchant) and opened his warehouse for preaching services until the building of a chapel in Duke St.

When a later chapel was built in Bridge St, John paid all the bills as they fell due until it could be made connexional property.

John kept open-house for preachers. For 40 years he was the only class leader and at one stage had 70 members in his class. As a preacher he was scriptural, practical, homely and full of unction. In leading a procession and preaching at a camp meeting, it was always manifest that he was a mighty man of God.

John was elected a Deep Poll member of Conference in 1876.