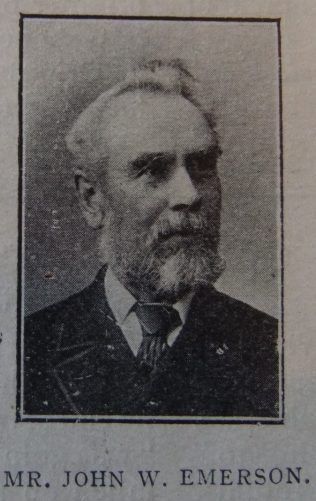 Transcription of ‘Sketch’ In the Christian Messenger by Rev. Arthur Jubb

If a stranger had visited the mother church of Grimsby Primitive Methodism a few years ago, and had stayed to the Sunday evening prayer meeting, he would have been impressed by one man. Praying as one who knelt in God’s presence, this man entered the holy of holies and pleaded like one who was accustomed to receive speedy answers to prayer. If you happened to be curious and opened your eyes, you would have seen his upraised hand as if with closed fingers he had laid hold of an unseen friend. While others prayed, this clasped hand was lifted, and the lips moved in continuous and earnest prayer. And very often he would rise from his knees, and go quietly around to have a word with the unsaved who might have lingered behind. You would have concluded at once that this was an exceptional man, and had you been permitted an intimate acquaintance you would soon have found that his was a royal soul.

His mother – Mary Emerson – was well-known for her power in prayer and for her skill as a class leader. When John William Emerson was converted in his teens, under the ministry of Parkinson Milson, he joined his mother’s class, and in a little while became assistant-leader to her. Very early he became an adept as a counsellor of souls, and as the years passed he became a spiritual expert in dealing with the soul’s diseases and difficulties. He knew the workings of the human heart, and the Way of the Spirit of God with the spirit of man. By holy living, and by his deep interest in others’ Welfare, he won the confidence of the men and women who knew him. He was the father-confessor and human adviser of many perplexed souls. My first experience of his skill is typical, At the request of Rev. James Keightley I had gone to conduct a fortnight’s mission, and like every other special preacher at Victoria Street Church, my home was with Mr. and Mrs. Emerson. The Sunday services were an inspiration, and ere the day closed a number of young men and women surrendered their lives to Christ. Night after night the meetings were held, and every evening there were converts – until the second week. Then for two nights there were no visible results. A feeling of impotence and darkness came upon the prayer meeting. Men confessed they could not pray. It seemed as if unseen evil powers were in conflict with the praying hosts, and as if the people of God could not prevail. I was perplexed, and did not know what to think or do. My host saw my distress, and began to talk to me about this strange phenomenon. He quoted from James Caughey’s letters (which he had read to great profit), told me incidents of earlier days, when men and women mighty in prayer wrestled with the same difficulty, and ended by saying confidently: “But we shall get the victory to-night ”—which we did. During my first item of four years in the circuit, he proved himself a loyal helper. His insight into human character was like that of a wise woman – instinctive and penetrating – and his power of overcoming difficulties in church life was very great. He was one of the purest, wisest, and noblest souls I ever knew, a strong pillar in our Church.

Happily, it is not difficult to indicate the sources of his strength. He was fully consecrated to God.

He was a passionate lover of Primitive Methodism. That love was intelligent and well based. I believe he bought every book written by a Primitive Methodist, or which had to do with our doctrines and life. For a quarter of a century or more he took every one of our Magazines. Disabled early by a severe throat complaint for preaching, he stuck to his own church. During twenty-five years he did not leave the Sunday services – to attend any other church—more than once. And for many years he gave up Sunday afternoon to visiting the sick and those whose love for Christ might be growing cold. He knew intimately every member and worshipper who attended that church.

His generosity can never be fully known. Ever ready to support Bazaars and other special efforts for raising money, he yet preferred to give in secret. In his business as painter and decorator he achieved considerable success, and was able to show much thoughtful kindness. If the Sunday morning congregation seemed smaller than usual he would give an extra half crown to the collection. Were any of his members too poor to pay their class money, then he paid it for them. And during practically the whole of his married life dinners were sent out every Sunday to some needy one who lived near by. How many people came to him to borrow money to help them over a crisis nobody knows; though I knew of a host who had been helped in that way. What if many never repaid? The in-gratitude of one or many was not allowed to freeze up the springs of generosity in his soul. He felt that money was a possession to be used in the service of man, specially for those who were of the household of faith. His love for the brotherhood was intense. He took literally the

Apostles’ injunction about not going to law with a fellow-Christian. In the aggregate he lost several thousands of pounds rather than prosecute debtors. He would have willingly lost more before he would have given occasion to the enemy to blaspheme the Church of Christ.

He had early learned the value of the “quiet hour.” He understood that the believer must have his times for meditation and prayer if his spiritual life is to flourish. He was careful to take heed to himself. With all this he was a zealous winner of souls. He would go far and do much to save one. And he had experiences of a striking character. On one occasion he stopped in the street a man whom he had known for many years, and who was now a backslider enslaved by drink. After expostulating with him about his excessive drinking he asked: “Whatever is to become of you? If you go on like this you’ll die drunk.” And the half-tipsy backslider said to this lover of his soul: “ Mr. Emerson, when I come to the end, I shall just kneel down” (and suiting the action to the word, he knelt in the middle of the road) “and touch the hem of His garment and I shall be saved.” Nothing could be said to induce the man to forsake his evil ways. With others he succeeded better, and many owe their souls to him.

Unexpectedly – through an accident – his earthly life came to an end. But he lived to purpose, and has a memorial in lives made brighter by his example and service, and must be reckoned as one of the builders of our Church in Grimsby. Many good men have lived and laboured there, and he was one of the best.

John was born abt 1837 at Grimsby, Lincolnshire, to parents George and Mary. George was a grocer.