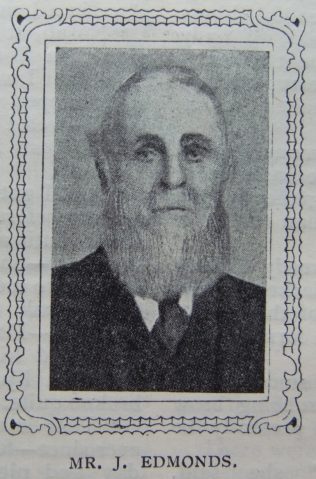 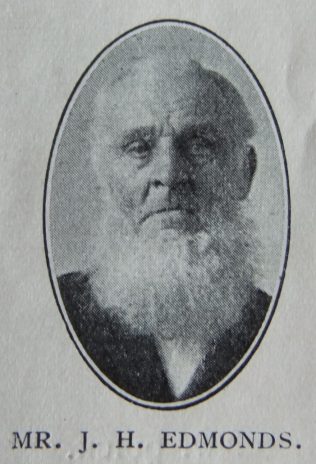 Mr. Joseph Edmonds, of Cradley Heath, has been a Class Leader for nearly forty years, and retains as much enthusiasm for that form of religious exercise as ever. His spheres of service have been at Worcester, Earlstown, Oldbury, and Cradley Heath. The fact is that wherever he has lived since he was converted, he has found an opportunity and ministry in Class Meetings. He is 78 years of age next June, and was converted under the famous ministry of Rev. Henry Higginson, known in some parts as the “Roving Ranter.” Bro. Edmonds retains the deep religious convictions of the early days, and he believes strongly in the worth and power of the Class Meeting in educating the believer in doctrine and the Scriptures, and also that it is the best devotional exercise of the Church.

In point of efficiency there can be no question as to Bro. Edmond’s fitness and adaptation. He has a sunny temperament, never lacking in good cheer, is kindness to the roots of his life, and generous almost to the fault. He is a member of the Society of Encouragers. One of his favourite expressions is “My heavenly Father knows.” But he says it in such a delightfully radiant manner that those who hear him are struck with the deep fellowship he holds with his God. There can be no doubt about his influence in the Church. His daily life is a witness to all that is best and true, and every member listens to his counsel with reverence and love.

He is in feeble health physically, but in soul he was never so strong and vigorous. The passing years reveal a growing saintliness in character and life. We pray for him still many years of joy in the service he loves so well. May his physical strength be renewed like the eagle’s, and his powers of service be many times increased, so that willingness of the spirit may not be hindered by the feebleness of the flesh.

Joseph was born on 1 June 1830 at Cradley Heath, Staffordshire, to parents Josiah and Sarah.

Joseph worked as a chainmaker.

Joseph was converted at the age of nineteen. As well as being a Class Leader, Joseph was also a local preacher. His obituary records that his dominant note was salvation by faith in Christ, and his expectation was immediate results. He delivered his message with passion and expected acceptance and surrender.