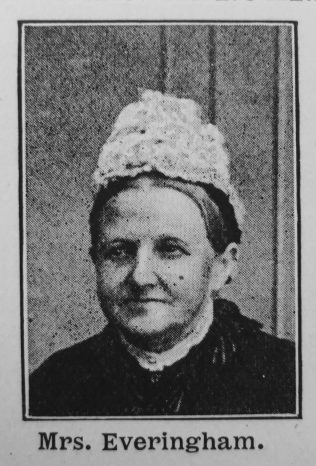 One by one the friends connecting early Primitive Methodism with the present are being taken from us, leaving survivors possessed of a deep sense of loss; but seldom is the loss felt to be greater than in the case of Margaret Everingham, who joined the Church triumphant on September 24th, 1900. She was born at Newbald, in the North Cave Circuit, on February 3rd, 1830, so that at the time of her decease she had reached the honoured age of three score and three years. Her parents were devoted members of the Wesleyan Methodist community, but were sympathetic toward other churches, and especially the evangelistic agency connected with our denomination, during the days of the apostolic Clowes and the mighty Oxtoby. Being possessed of considerable wealth, they were able to render valuable assistance to the material side of our work. This they did in giving land, on which was erected the first Primitive Methodist Chapel in their village, and in providing a home for many of our early preachers. Probably this impressed the mind of their daughter, Margaret, favourably concerning spiritual things. Anyhow, at the early age of ten years she was converted at Market Weighton, in Pocklington Circuit. On going to Hull a few years later she enjoyed the high privilege of being a member of the class that was led by the saintly Clowes. Of this experience we have heard her speak with evident pleasure, and we doubt not that this had much to do with that deep and beautiful spirituality which for many years was her chief adornment. About 49 years ago she became united in marriage with the late Mr. John Everingham, and a very happy union it proved. Shortly after marriage she and her beloved husband located at Market Weighton, and continued there for about 40 years, afterwards removing to Pocklington, in which place she resided until her death. No intelligent Christian who became acquainted with her could fail to see that as a Christian she was thorough. She viewed spiritual things seriously, and yet religion to her was a source of real enjoyment. She evidently had enjoyment in her close fellowship with God, and she had enjoyment in her fellowship with the saints. She therefore loved prayer, which brought her into special touch with God; and she also loved class meetings, band-meetings, and love-feasts, which brought her into the communion of God’s people. Her religion had a practical side, which she esteemed to be very important. She therefore heartily threw her energies into everything likely to glorify God in the good of her fellows. She thought of those who were in the “regions beyond,” and hence became a successful missionary collector. She thought of the sick, and therefore became a sick visitor of a very high order. She thought of the lost condition of those who did not believe with their heart unto righteousness, and hence became a valuable worker in prayer meetings, in the instruction of penitents in the way of life. She thought of the spiritual interests of her sons and daughters, and hence prayed with them and for them, and laboured for their conversion; and therefore, who can wonder that one of the sons is a godly, soul-saving minister; that one of the daughters is the wife of another minister, who, we believe, has been instrumental in the salvation of thousands; and that the large family of sons and daughters are living a godly and useful life? She thought of the self-denying labours of ministers and local preachers, and hence very many of God’s servants now in heaven, and very many still on earth, have found the kindest hospitality in her Christian home. The richest and greatest people of our land could not have greater kindness shown to them than she showed towards these servants of the most high God. She has been a mighty saint, and has done valuable service to the Church, and her name is lovingly remembered by large numbers. She was a model mother, looking to the varied interests of her family, and hence her loving ministries in the family will not be forgotten. We believe her name will be revered by her surviving children and their children to the end of life. She experienced trial, sorrow, and suffering, but amidst all she was patient, prayerful, and peaceful. Her physical affliction at times was severe, and sometimes long-continued, but her trust in God was never failing. As the end of life drew near she found the staff of the Good Shepherd safe to lean upon. For two or three days prior to death pain seemed to have departed, and our Heavenly Father permitted her to have a very quiet and peaceful termination of a beautiful life.
“A holy quiet reigned around,
A calm which life nor death destroyed.”

And as her spirit passed to the higher service of heaven, it was clearly realised that there was
“Another gem in the Saviour’s crown,
And another saint in heaven.”

Our prayer is that there may be raised up in our Zion thousands who shall be pure In heart, holy in life, and useful in work as was the departed.

Margaret was baptised on 16 February 1830 at North Newbald, Yorkshire. Her parents were George Galland, a farmer, and Jane.