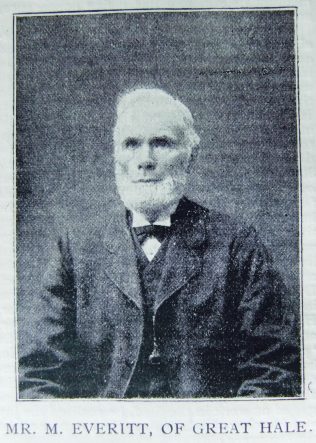 Transcription of Sketch in the Christian Messenger in the series ‘Local Preachers worth knowing’ by W. Overton.

PRIMITIVE Methodism, in the Sleaford Circuit, has had many noble men amongst its laymen who have served its interests in a generous and ungrudging manner, and who have done much to strengthen and consolidate the work of our Church in this part of Lincolnshire.

There were John Newton and William Stennett, who travelled hundreds of miles in their endeavours to evangelise the inhabitants of the villages of South Lincolnshire. Frederick Hipkin, who, as choir-master, local preacher and circuit steward, rendered splendid service for many long years; and Josiah Buttler who, as class-leader and society steward, did much to increase the influence and power of our Church in the town of Sleaford, and who, as circuit steward, knew intimately and helped liberally all our country societies, so that his name is now ‘as ointment poured forth.’ These all have joined the ‘great majority around the throne,’ and are to some extent crowned and ‘sceptred spirits who rule us from their urns.’ There is, however, still one at least left, the subject of this sketch who knew and laboured and was closely associated with them all, and who now as a local preacher occupies a unique position in our circuit life and work. At the ripe age of three-score-and-ten he still remains with us to counsel, inspire and help in the work of this large circuit.

He is a ‘Local Preacher worth Knowing,’ and those who have been privileged to know him intimately can testify that he is no ordinary man. Physically, he is considerably above medium height, and has a fine appearance, and would command attention in any pulpit.

Mentally, he is much superior to the generality of local preachers, and has wisely and assiduously cultivated the intellectual side of his nature, and so acquired large stores of useful knowledge He has not attained to this, however, without considerable effort. He was born with no silver spoon in his mouth. His parents, who lived in Northamptonshire, were working people. About the time of Martin’s birth – which was on March 8th, 1829 – they were small farmers; but owing to agricultural depression, and his father being bond for a person for whom he had to pay nearly £200, they had to give up their farm, and young Martin at an early age went forth to earn his own living. Whilst living as a farm-servant at Gedney Hill he attended the Wesleyan Chapel at Holbeach Drove, and being religiously inclined, he was invited to become a Sunday school teacher. He accepted the invitation, and not long after, at a Sunday evening service, he went to the ‘penitent form’ and sought the Saviour. He, however, did not find peace, so the next Sunday evening he went out again. Still the light did not come, but during the week, whilst engaged at work in the field, he realised the joy and blessing of salvation. He was now about sixteen years old.

Shortly afterwards he went to live at Peterboro’ with his brother, who was a miller and baker, and learnt the trade. Whilst there he was associated with the Wesleyan Church. From Peterboro’ he removed to Londonthorpe in the Grantham circuit. It was whilst he was there that the memorable controversy arose in the Wesleyan Church on the ‘Fly-Sheets,’ which led to the expulsion of Everett, Griffiths, and Dunn. Many left Wesleyan Methodism in this neighbourhood, including several local preachers, who took the old theatre in Grantham and commenced holding services there. Mr. Everitt was led to join them, and they took the name of ‘Reformers.’ They also commenced going into the surrounding villages preaching the Gospel. It was at this time that he commenced to preach; but realising the importance of the work, he was much exercised as to his call to preach. His undoubted gifts, however, so impressed others that they urged him to continue, and seeing several led to the Saviour through his efforts he was encouraged to continue. He now removed to Newark, and there he interested himself in the ‘Ragged School’ movement, and helped in the formation and working of one. Whilst here he married the lady who for many years was to him a true help-meet, and shortly afterwards returned to Peterboro’, where he was led to join our church.

In the year 1864 he removed to Great Hale, in the Sleaford circuit, where he has since resided, and threw in his lot with our people there. The church was in a low condition, but under his leadership things prospered, a good Sunday school was established, the debt of £50 upon the chapel was removed, and a piece of land for future extensions was bought. Our church here has passed through many vicissitudes, but he and others have remained faithful and true, and now we have a thriving and vigorous village cause; and through the energy and musical ability of one of Mr. Everitt’s daughters we have a good choir, which adds much to the attractiveness and helpfulness of the services.

During the 36 years Mr. Everitt has been connected with the Sleaford Circuit he has rendered distinguished service as a preacher. A glance at his record of sermons preached shows that in the town church, where he is always welcome, he has preached over one hundred different sermons, and at other places nearer home over two hundred. Some of his texts are unusual, and his sermons reveal not only extensive knowledge, but correct homiletical methods and considerable originality of thought. He has for years been much in request for special services of all kinds, not only in our own church, but also amongst Wesleyans, Wesleyan Reform, Methodist Free Church and Congregationalists. He has also done much platform work. He is one of the ablest lay preachers the writer has been privileged to listen to, and although now over 70 years of age, he is still remarkably vigorous and eloquent. He, however, keeps the main purpose of preaching ever before his mind. In his early days he read the lives of John Wesley, William Bramwell, William Dawson and others, and these led him to preach directly with the purpose of leading sinners to Christ.

He is a strong and staunch total abstainer from all intoxicating drinks, and has been for over 54 years. In his early days, when the Temperance movement was not so popular as it is today, he was subjected to considerable ridicule on account of his principles; but with characteristic pertinacity he remained true to his pledge, and through all the years has been a firm adherent of the Temperance cause.

He is strongly attached to Free Church principles, especially to those of his own church, and a stern opponent of sacerdotal assumption, and clerical intolerance. On one occasion the vicar of ________ sought to interfere with a procession in connection with the camp-meeting. Mr. Everitt so mercilessly upbraided and exposed him that the vicar made off, and afterwards sent a request for an interview with him and our minister, when he humbly apologised. In the business courts of the circuit some may think that he is sometimes rather severe and sticks tenaciously to rule; but a methodical business man himself, he believes that all church and circuit business should be done ‘decently and in order,’ and that no one should be allowed to ride rough-shod over the constitution of Primitive Methodism. The minister can always rely upon his support in maintaining discipline.

Whilst a firm believer in the rights of the laity , he is most courteous and considerate in his attitude towards the ministry, and his comfortable home is ever open to the ministers, whom he delights to honour.

The circuit has shown him all the honour in its power, and has sent him as its delegate to District meeting.

He has also received considerable outside honour. When the Parish Council Acts came into force, he was elected at the head of the poll by a substantial majority, and was appointed Chairman of the Council. He has also been Chairman of the Burial Board, and vice-Chairman of the Technical Committees, and ultimately chairman, which position he still holds.

Strong in his convictions, fearless in his utterances – he is quite regardless of consequences when convinced of the righteousness of a thing – he has, nevertheless, won and maintained the respect of a large circle of friends.

During the last few years he has been called to pass through the furnace. The wife of his youth has been taken away by the hand of death, he has had a serious illness, when it was thought his end was nearing. He has, however, been thoroughly restored to health, and during the last year or so, during a general revival in the circuit, he has seemed to renew his youth, and has visited distant places on the circuit he had not been to for years. And now, in the society of his two younger daughters, he is spending the last years of his life in comfort and peace, and is rejoicing in the prosperity of the Church and Circuit which he has served so long and so well.

Taking him for ‘all in all’ he is a fine specimen of a Primitive Methodist layman and is worth knowing; and to the writer, to know him intimately, and to be closely associated with him for some time, has been one of the privileges of his life. May he be spared for years yet, and then may his sun set in a cloudless sky!

Martin was baptised on 16 March 1829 at Glinton, Northamptonshire. His parents were William, a farmer, and Susanna.