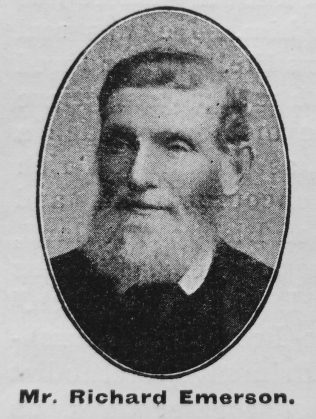 Transcription of Obituary in the Primitive Methodist Magazine by J. Toyn

Our Frosterley Church in the Westgate Circuit has lost one of its oldest and most respected officials and members by the death of Mr. R. Emerson. He was born in Weardale in 1830, but spent many of the years of his earlier life in Australia. Returning to England, he settled at Frosterley, and in 1862 was converted under the preaching of the Rev. Henry Phillips  (of sainted memory), and till the time of his death was one of the most consistent and loyal members of our Bridge End Society.

For over 30 years his home was open to ministers and laymen, and many to-day entertain the kindest memories of his genial hospitality and sterling Christian work. He was Society steward for over twenty years, and was most energetic and faithful in all his duties; in fact, we have often heard him described as “a model steward.” Not only did he support our own funds and institutions most liberally, but all good causes found a friend in him. Seven years ago he sustained a great blow by the death of his wife. Their married life had been of the happiest description, The family altar was erected morning and night, and the truest testimony to the work and character of the parents is that their son and three daughters are serving the Lord Jesus Christ, and following in the footsteps of their now sainted father and mother.

In the last five years his health failed greatly, but though unable to attend service on many occasions, at home he prayed for God to bless the Church he loved. The end came rather quickly. He was only confined to his bed for a week, then on November 13, 1902, passed to be with Jesus, which is far better.

It was a joy to meet him, and we shall always be thankful that we had the pleasure of knowing him. Space will only allow us to quote from two of the many letters of condolence received by his friends. The Rev. D. McKinley, of Carlisle, says, “Your father was one of the most honest and reliable men I have ever known. There was nothing artificial about him. He was real in religious and business life. He endured and even sacrificed much rather than grieve and offend anyone. The memory of such a parent must be to you, as a family, a rich treasury of comfort, encouragement and hope.” Mr. J.J. Spoor,  of Bishop Auckland, says, “ He was one of the most conscientious and upright men that I ever dealt with.” He was interred in the Frosterley Churchyard, beside many old Primitive Methodist worthies and friends of former days, on November 15th, 1902, and the large attendance of friends from our own and neighbouring circuits testified of the great esteem and respect in which he was held. The Rev. J. Toyn conducted the funeral, and briefly spoke of the work and worth of our departed friend. He has gone from us but his work abideth, and his memory will be an inspiration to all who knew him till they meet him again in Heaven.

Richard was baptised on 20 March 1830 at St John’s, Co. Durham. His parents were Joshua, a lead miner, and Ann.

Richard married Jane Walton (b abt1831) in late 1849 in the Weardale Registration District, Co Durham. They emigrated to Victoria, Australia, on an assisted passage in late 1857, arriving on 9 December 1857. Records identify five children.