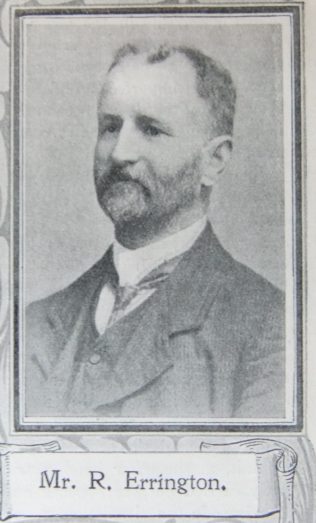 Mr. Robert Errington was first associated with our Church as a young man at Easington Lane on the Hetton Station. At the age of nineteen he came to Sherburn Hill as manager of the Co-operative Stores and at one threw himself into the work of Church and Sunday School.  During the twenty-six years’ residence here, not only his business, but his interest in our cause has grown. He has filled all the offices in the Sunday School, and is pre-eminently at home there. Though not a preacher he married Miss Lunns, who was then and still is an earnest and acceptable local preacher, and has ever made her home a home for preachers. He has one son in training for our ministry, and one daughter an interested worker in our Church. His business qualifications are ever put to the best use in the service of his Church. He takes an active interest in the public work of the District.

Robert was born 1859 at Hetton Le Hole, Co. Durham, to parents Robert and Margaret. Robert, senior, was a joiner.