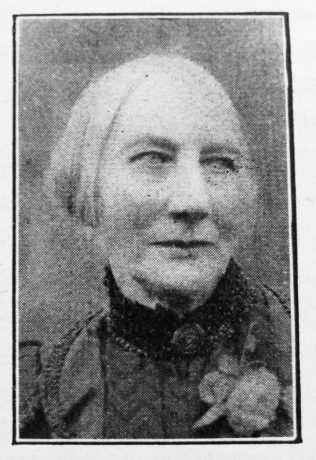 Transcription of Obituary in the Primitive Methodist Magazine by Samuel Jeffrey

Mrs. Ruth Evans was born in Kendal Vale, Westmoreland, and was of English extraction. On her marriage with Mr. E. Evans she came to Coedpaeth, North Wales.

On locating at Coedpaeth Mrs. Evans became a member of the then small Primitive Methodist Society of that place, and for fifty years has been a faithful member and official of the church of her early choice.

For fifteen years she discharged the duties of chapel steward with credit to herself and all concerned. For many years she entertained the preachers, local and itinerant; she was a life-long abstainer from all intoxicating drinks, and for years kept a total abstinence pledge book, which has been the means of leading men and women from the paths of intemperance to the paths of sobriety.

As a mother she was devoted to her children. Though Mr. Evan Evans, her husband, who was of Welsh extraction, was identified as a member with the Welsh Church, Mrs. Evans was anxious to train her children after the English custom, and educate them according to her own wishes, to which Mr. Evans consented. They received an excellent training, and were total abstainers from their childhood.

Mrs. Evans, having a business apart from her husband’s work, gave her children such an education as would fit them for almost any ordinary station in life, and for this object, she toiled hard and long, being diligent in business, fervent in spirit, serving the Lord.

She was successful in this noble work, for she has seen her sons converted to God, consecrated to the Lord in the morning of life.

In recent years Mrs. Evans has suffered from several attacks of bronchitis and heart trouble, and on the morning of the 14th of October she was stricken down with paralysis, which deprived her of the use of the right side, and also of the power of speech.

From the first no hope of her recovery was entertained. The family were summoned, and were soon at her bedside and watched her night and day until the end came.

On Tuesday, the 24th of October she calmly and serenely crossed the bar.

The funeral took place on Friday, the 27thof October. A short service was held in the Primitive Methodist Chapel, conducted by the circuit minister, Rev. R. W. Burnett.

A few favourite hymns were sung. Mr. S. Jeffery, Salvern, who had known the departed sister for forty-four years, and had been intimately acquainted with the family for that long period, gave a pathetic address.

Much sympathy was shown as the funeral passed through the village of Coedpaeth. On nearing the Wrexham Cemetery friends and employees of the firm of Messrs. Brice and Evans joined the procession. The remains of our departed sister were laid to rest in the grave of her late husband.

Rev. R. W. Burnett officiated at the grave. A memorial service was held in the Primitive Methodist Chapel, Coedpaeth, on Sunday, Nov. 26th, conducted by Mr. Jeffery, who gave a unique testimony from personal experience, of the noble Christian character of our departed sister, and an epitome of the Christian work done in the different departments of the Primitive Methodist Church.

Ruth was born abt1827 nr Kendal, Westmorland. I have not been able to identify her parents.

She married Evan Evans (1826-1888) in late 1851 in the Kendal Registration District, Westmorland. Evan is variously described as a lead miner, draper and grocer. Ruth clearly ran the shop when Evan was out lining. Census returns identify four children.