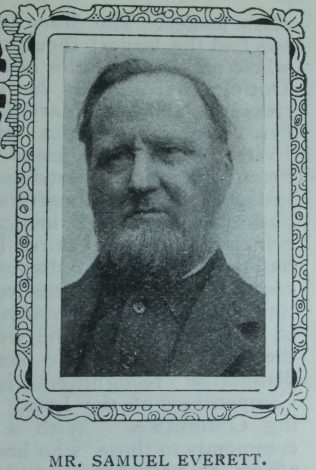 Mr. Samuel Everett, of Canning Town Station, who has had the opportunity of preaching the Gospel in nearly seventy Primitive Methodist churches, is well-known to Primitive Methodism in East London, and largely also in the county of Essex. Born in 1841 and converted in 1860, Mr. Everett had, practically, no early educational opportunities, and not much educational aspiration, until he reached the verge of manhood. By industrious and earnest efforts in the moments of a busy business life, Mr. Everett has been regarded for many years, both by the churches and by his fellow local preachers, as a well-informed and capable local preacher and platform speaker. He has been a Sunday school teacher for twenty-six years in addition to his labours as a local preacher and class leader. The Mary Street Church has had the largest though by no means the whole of Mr. Everett’s interest and labours. During twelve years he was the Trustees’ treasurer, and both Mary Street Church and her daughter societies have had in Mr. Everett a generous friend and an inspiring financial leader. Industrious, thrifty, economical and generous in matters pertaining to his business, Mr. Everett has carried these same principles into his Church life, and whilst he has neither time nor disposition for what is commonly called “pleasures,” he has both time and disposition for anything that appeals to him as service for the welfare of men and the glory of God. He has won for himself distinctive recognition in the Homilectic Competitions of the Local Preachers’ Training Committee. With a character which commends to those who know him his best efforts at preaching; and with preaching that always aims at producing the Christlike type of character, Mr. Everett is a brother and a fellow-labourer of whom the Church has no need to be other than piously proud.

Samuel was born in 1841 at Belchamp St Paul, Essex, to parents James and Hannah. James worked the land.

Census returns give the following occupations for Samuel.