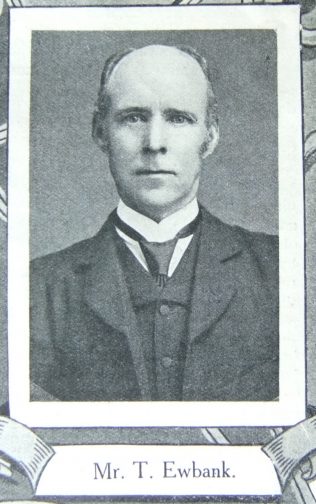 Mr. T Ewbank has been Circuit Steward ever since the formation of the Appleby Branch. He possesses a robust type of Christianity, believing more in deeds than words, a good life being the all important thing. He was born in Wensleydale, yet he claims Coverdale as his rearing place. His father – whom he sums up in a short, telling sentence, “He was a good man,” the emphasis being on the “good” – made a lasting impression for god upon him. For over 20 years he has been identified with our Church. He is also an honoured Class leader and Society Steward. What a listener he is when in the sanctuary! How his soul feeds upon God! At the close of the Sabbath, when he says “Good-night,” he looks into the preacher’s eyes and his soul speaks a benediction of thanks the like of which only those souls who feed richly upon God can give.

Thomas was born in 1856 in Wensleydale to parents Thomas and Jane. Thomas, senior, was a farmer.

Census returns give the following occupations for Thomas.

Thomas married Hannah Wilson (abt 1867-1939) in the spring of 1901 at Appleby, Westmorland. Census returns identify three of four children.