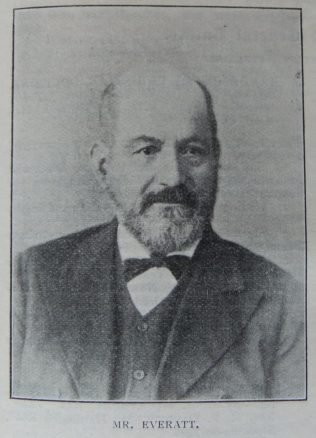 The extension of the Primitive Methodist Church in South-Western Essex from that corner of the county comprised in the Canning Town Circuit to the newer districts comprised in the West Ham, Forest gate, and Upton park Circuits has, to a very large extent, been the achievement of an ernest evangelism, proceeding, in the first instance, from the Poplar Circuit, and keep alive and strengthened by an ever-renewed energy gathered into itself at every new point of successful missioning. There have been no periods of extraordinary revival blessing. There has been a continuous enclosement of new territory, and a steady an unbroken winning of new subjects to the experiences, and life, and fellowship of the evangelizing Churches. The growth of our Church in these districts has been much more that the result of additions to its membership from households in which there were some already Christian believers than from those sections of the population which are stolidly and determinedly irresponsive to every kind of effort that Christian people and Christian organizations make to bring them to the possession and confession of Christian life.

Amongst the many agents, some of whom are at rest with the glorified, and others are waiting their reunion with their departed fellow-workers, who have rendered energetic and honourable service in this work of Christian extension, the subject of this sketch, Mr. Wallace Everatt, would be readily accorded a specially honourable if not a premier place of honour for the length, quality, variety and quality of his services. Born in Painswick, in the Stroud Circuit, on April 24th, 1843, Mr. Everatt ran a career of unrestrained indifference to the claims of God until January, 1857. Led by the Spirit of God to our chapel at Painswick, he, under a sermon preached by a Mr. W. Jennings, was convinced of the error of his ways, and there and then yielded himself to God for pardon, purity and endowment for God’s service.

During the summer of the year of his conversion he was called upon by his brethren of the Painswick society to take part in the open-air efforts by which they laboured to win the careless and sin-cursed to the joys and services of Christian life. In the March of 1860, one month before he was seventeen years of age, and about three years after his conversion, he was put on the plan as a prayer leader. From that period until the year 1864 he advanced from stage to stage in the esteem of his brethren and the societies in the Stroud Circuit, so that it was not at all uncommon for him to have ten or eleven full Sundays’ appointments in each quarter.

Coming to London in 1864, and being unable to settle long in any locality on account of his employment, Mr. Everatt was compelled to live a gipsying kind of religious life until the year 1866. During this time of unsettlement he held fast to his relationship to God, and wherever he was he always made it a point to be at some place of worship as frequently as was possible to him both on week-days and Sundays.

In the year 1866 Mr. Everatt settled at Canning Town. Here he united himself, with great thankfulness of heart, with his own people. Soon winning for himself a place in the confidence of his brethren in the fellowship of the Canning Town society, he was not long before he was in full work in the earnest evangelism which marked that period of the history of his Circuit. Ready, always ready for any service that he was asked to undertake, Mr. Everatt has, in his forty years’ connection with this Circuit, been one of the responsible members of committees for about a dozen rented rooms for the commencement of new causes, and he is at the present time a trustee for seven chapels, and has just been released from his eighth trusteeship by the sale of land at Barking. In some of these new interests he has been the first class leader, in others the first society steward, and in some others still the first Sunday school superintendent.

Everybody who knows Mr. Wallace F. Everatt knows that he has always been, and to-day is, the ready and cheerful stop-gap for any place in the service of his Church, whether it be the place usually taken by the minister or the lowliest place filled by any of his fellow laymen. He has been station steward at different times to a total of about seventeen years. He has been six times delegate to District meeting and four times delegate to Conference. At the last District Meeting he attended he was heartily and unanimously elected vice-chairman of the District Meeting. In his work as a local preacher he is always a welcome, acceptable, and useful minister. Sympathetic and appreciative towards all the Connexion is doing for the better equipment of local preachers, Mr. Everatt strongly believes that the help rendered by the associations must never be relied upon as a substitute for self culture which each man can best for himself select and pursue. In a very special sense Mr. Everatt is a Bible student. He expositions and applications of the Word of God are always characterised by an incisive spirituality of conception. This spirituality of conception gives Mr. Everatt a very conspicuous power over his hearers, and besides affording evidence of the spiritual-mindedness of the preacher, it gives such form and tone to his addresses as stamp them always with his own characteristic personality, and fill them with a spirit of power.

Sixty-three years of age, and all his life a hard-working man, it is yet, as it has always been with him, his meat and drink to do the uttermost of his ability for the cause and Kingdom of his Divine Master. Amongst the various cares of Mr. Everatt’s life, the Kingdom of God and His righteousness has as ever the premier place. He is a splendid type of Christian working man, and, having been for many years his own master, he is free to service the cause of his Lord as circumstances may require. As an official Mr. Everatt has been hopeful when others have been fearful; his influence has always been, “Hold the fort till you are driven out of it,” A Church that can produce and use for evangelistic extension such men as the subject of this sketch has not far to seek its credentials as a section of the Church of the living God. Hale in health and hopeful in spirit, as Mr. Everatt is, we may reasonably hope for him, as we are sure he would like us to pray for him, that the Head of the Church, the God in whose salvation he has such abiding joy and strength, may grant to him yet many years of increasing usefulness.

Wallace was baptised on 21 May 1843 at Painswick, Gloucestershire. His parents were John Frederick Everatt, a tailor and draper, and Jane.

Whilst a youth at Painswick, Wallace was apprenticed to a plumber and glazier. On moving to London, he set up in business as a house painter and decorator.

He married Sarah Foster (abt 1838-1918) in early 1868 in the West Ham Registration District. Census returns identify three of six children.