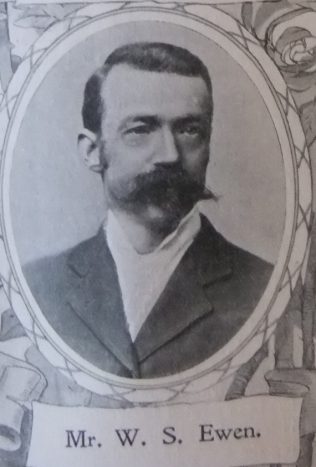 Mr W.S. Ewen is the Circuit Steward of the Edinburgh station; also a local preacher, Vice-president of the Livingstone Hall P.S.A., superintendent of our Leith Sunday School and Treasurer of the Leith Trust. He is what every Circuit Steward ought to be, an optimist to the core. However black the outlook, or numerous the croakers he always comes up smiling. Born at Whitelets near Ayr in 1855 he removed to Wishaw to learn the printing trade, and there came into touch with Primitive Methodism, joining our Shieldmuir Church in 1869. His apprenticeship completed he spent two years in Rome teaching the printing trade in the Italo-American school, and then returned to Wishaw to get married to an old scholar of our Shieldmuir Sunday School. In 1876 he removed to Edinburgh, but a year later left for China in consequence of his wife’s health. He returned in 1884, and has ever since been connected with our Leith cause.

William was born in 1855 to parents John Ewing and Ann Stevenson. John was a miner.