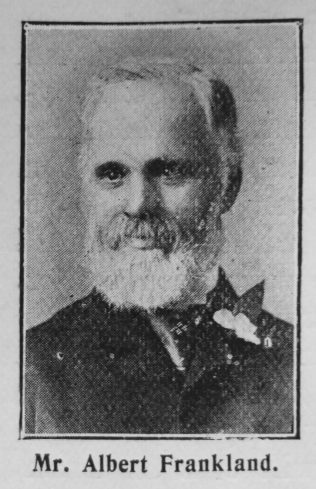 Transcription of Obituary In the Primitive Methodist Magazine by J. Wilkinson

THE Bradford Second Circuit has lost a really valuable man in the death of Mr. A. Frankland, which took place on May 1st, after a painful affliction lasting over four months. For some two years his friends have observed a decline in physical health. But just before Christmas he was compelled to absent himself from business and the means of grace, and from that point became gradually worse until he was translated to he with Christ which is far better, and so to realise the gain of dying. He was pre-eminently a good man, and his goodness told upon others. He was a Band of Hope worker from boyhood, and became Sunday School Secretary when only seventeen years of age. He was a Primitive Methodist of over forty years’ standing, and a devoted Sunday School toiler up to the last. He had an important and appreciative class of young women at Horton Bank, whom he taught with great delight as long as health permitted. He was class leader for over thirty-two years and diligently attended to the duties of that office. During his illness his chief concern was about his Sunday School and society classes. For many years he served as Circuit Sunday School Union Secretary and Circuit Steward, and may appropriately be designated “a model steward.” He was a truly loyal man Connexionally, interesting himself deeply in all district and denominational matters. He has more than once represented the Circuit at District Meeting, and last year was the representative of the District Committee. He was quiet and unpretentious, yet he rendered splendid service in many ways. The outstanding feature of his character was his kindly Christian charity. He would always take the most generous view of any question, and would never say anything against anyone unless forced to do so in the interests of truth and fair play. He could speak out when necessary, but he knew also how to keep silence, which often proved “golden.” The ministers ever and invariably found in him a true friend, a wise counsellor, a reliable helper. He was not an official who attended business meetings only, but regardless of bad weather or even his own business claims, he attended regularly all religious services – including week-night preaching at his own place. Thus his example gave emphasis to his words, and made his speech eloquent for good. He bore his affliction without repining and crossed the bar with triumph. It was my privilege and joy to visit him regularly during his illness. The first time I saw him after he took to his bed he said: “The crisis has come, but its all right. Christ is a blessed Master, and if I had to begin life again I don’t know that I should spend it differently, except where I could mend it.” It is, therefore, no wonder that the attendance at the funeral was so large, the Chapel being filled for the service, and others waiting to join us at the cemetery, every place in the Circuit being well represented. The interment took place on Saturday, May 6th. The Society Stewards from each place in the Circuit acted as bearers. His remains were taken to Horton Bank Chapel at his own request, for he said: “Take me to the school; it is there I love to be.” The solemn and impressive service was conducted by the Superintendent of the Circuit, and the Rev. J.C. Livesey gave a very appropriate and effective address. The choir sang an anthem and two hymns. A deputation from the Bradford Primitive Methodist Council, and also from the District Meeting, then sitting at Manningham, attended and had it not been District Meeting time there would doubtless have been a much larger attendance of his ministerial friends. A memorial sermon was preached by the writer.

Albert was born abt1839 at Skelmanthorpe, Yorkshire, to parents George and Betty. George was a wool loom weaver (1851).

Albert died on 1 May 1900 at Clayton, Bradford, Yorkshire.