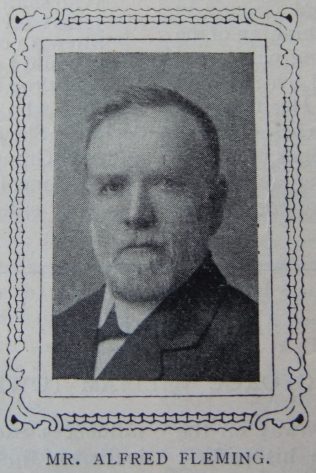 Of a certain individual it was remarked, “he had a strong belief that the only chance of realizing a true life was to do something that interested one with all one’s might.” Brother Alfred Fleming strikingly illustrates this, in the sphere of things spiritual. In his infancy an atmosphere of piety was round about him. The memory of his mother is a fragrance to him to-day. Thirty years ago he came into the closer union with Christ. The years between have been full of Christian activities. Twenty years of superintendency reveal untiring interest in Sunday school work. The confidence of his brethren has given him many years in the Society stewardship. He became a local preacher during the ministry of Rev. P.T. Yarker, but the outstanding date in this fellowship of Holy service is June 22nd, 1885, when he first took charge of the class which has been under his continuous leadership ever since, and to the interests of which he has been so loyally devoted.

Having been born at Churwell in 1850, his entire life has been spent in association with the Churwell Society, of Leeds II. Circuit. Theologically conservative, and swayed by deep convictions of the utility of those organisations which have contributed so largely to the upbuilding of Methodism, his words and actions are those of one who has confidence in his position and his message. Experience of something of life’s darker and more rugged discipline has not been without its compensations. He commenced life in the pit before he was eight. In sorrows garden he has plucked many a sweet flower of sympathy, passing it, on to others. Bereavements have wrought the holy work upon the top of the pillow.

As a member of the Holbeck Board of Guardians he is rendering useful social service.

Alfred Fleming was baptised on 22 September 1850 at Morley, Yorkshire. His parents were William, a coal miner, and Sarah.

Alfred married Harriet Atkin (b1853) in late 1893 in the Dewsbury Registration District.

Alfred’s death was registered in the third quarter of 1917.