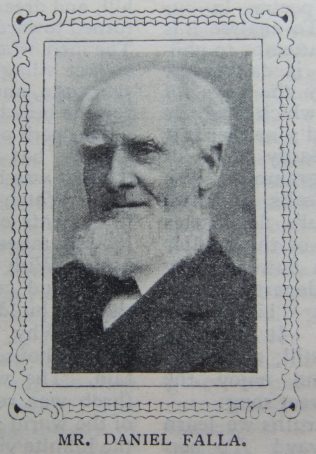 A remarkable feature of Primitive Methodism in the outpost Circuit of Guernsey is the unusual number of aged people amongst us who are still vigorous. Foremost, in some respects, of this number is Mr. Daniel Falla – seventy-seven years of age – with a figure as straight and a step as quick as those of most young men. He has been a standard-bearer in our Delancey Society upwards of fifty years, having filled all the offices of Society Steward, Class Leader, School Superintendent and Trust Treasurer for terms varying from twenty to forty years. He looks back with pleasure over a long line of ministers and hired local preachers who have been in the Circuit during that period, and delights to give reminiscences of the stirring events of past days. Four times our friend has been honoured by his brethren with the appointment to District Meeting, and the occasions when he has thus visited England and realised the larger Connexional life are still among his most vivid and treasured memories. In all his labours for the Church he has been faithful and wise. His Class Meetings have been successful in keeping together a class of nearly fifty members. His life and counsel have alike been helpful to those under his care, and his presence is familiar and welcome in their homes. The half century has not passed without its ecclesiastical conflicts; but they have not been of Mr. Falla’s making, and, while many have from time to time fallen out of the ranks, he has held the fort for the Circuit, with the result that to-day we have at Delancy a well-matured church, vigorous, united, and hopeful. In September, 1907, Mr. Falla retired from some of his activities, including the leading of the class, but he still retains his position as Society Steward. May his eventide be light, and his entrance into the eternal Kingdom abundant.

Census returns identify two people called Daniel Falla, born abt 1830, and living in Guernsey. One was a lime and brick burner born on Guernsey, the other a stone cutter born on Herm. Can anyone identify which is the subject of this sketch?