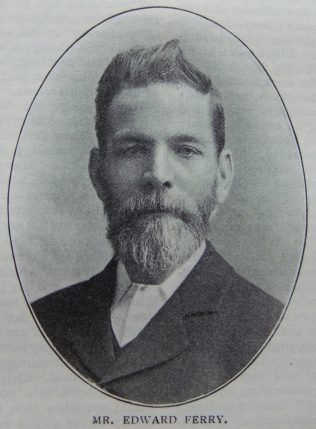 Transcription of ‘Sketch’ in the Christian Messenger by Rev. R Walton in the series ‘Veterans of our Local Ministry’

“Since God converted my soul, I’ve always been on the look-out to get somebody else converted,” were the words of Edward Ferry, of Wheatly Hill, soon after our acquaintance began, and all who knew him will testify that that expression contains the ambition of his life. The place where “a soul-saving is going on” has such attraction to him that he cannot keep away, and he has been known to “trudge for miles,” after a hard day’s work in the pit, that he might help on the work and share in the joy of salvation. He is never idle, and how he manages to do so much would be inexplicable were it not for his anxiety for souls.

He was born at Shotton Colliery on 29th July, 1851. His parents were poor but religious. There were six children in the family, three sons and three daughters, and Edward was the youngest child. The schooling at that time in the pit villages was decidedly poor, and as Edward went to work in the pit at the age of twelve, his education was of a very very meagre character. Fortunately, when seventeen years of age, he was converted, and, as at the same time the thought of other people’s conversion rushed into his soul, he resolved to seek it, and to equip himself as well as he could by cultivating his mind. He soon learned to read fairly efficiently, and his love of books, especially the Word of God, became very strong, and next to that Word nothing pleases him so much as a good religious work.

His first real sphere of labour was the Sabbath School, which he entered as a teacher immediately upon his conversion, and although he has been a local preacher and leader of the Circuit Mission Band for years, he has stuck to the school, and last Easter Sunday he received a Certificate of Honour for forty years’ faithful labour therein.

His next field of service was the pulpit, which he occupied for the first time in March, 1873, in his father’s house, where the services were regularly held, as the little society to which he belonged had not a proper meeting-place. That service is recorded in his journal, as are all his services, and many interesting and happy, as well as amusing experiences are marked down. The entry of converts is in such a spirit of gladness and humility that one cannot help lingering over what is written, and when one closes the book one feels better for the perusal.

In the year 1880, Mr. Ferry entered into married life. The young lady of his choice was a good Christian, who heartily joined him in his labours for God. They were residing at Middle Rainton, and soon had the joy of sharing in a great revival which took place without the aid of a special outside agent. “God and the Church,” said Ferry, “brought it about.” But its influence remained with them, and wherever they went they aimed at a revival, and never failed to secure one.

At this time certain inducements were offered him to remove to Seaham. He was greatly inclined to accept, and only hesitated because “the Lord had not told him to go, but he was praying about it.” He liked to know he was under the guidance of God, and until an answer was given him he refused to move. The friends might increase their entreaties and give many reasons, but it was of no avail; he “would wait to hear what the Lord said.” At last the answer was given, but it was in the negative, and directed him to remove to West Cornforth. This was unexpected and a little surprising, but obediently he went, and had much cause for joy that he did. Though his inclinations were for Seaham, the voice of God said “No,” and with the confidence of a loving child he carried out the Divine Will.

At West Cornforth he found a society of twenty members. The spiritual atmosphere was poor, and would have daunted many another person. Not so with Ferry. Full of courage, confidence, enthusiasm, and with the consciousness that he was where his heavenly Father intended him to be, he and his wife by prayer, visitation, tract distribution, &c., set to work to improve the place. His aim was one hundred members, and at the end of two years and five months he and his wife had raised up three new classes, and the twenty members had become ninety-nine.

Quarrington Hill was the next place to reap the benefit of his labours. The was a small chapel when he arrived in 1883, but it did not seem to be suitable for the work needed to be done, and he longed to see a better one erected. He made it a matter of prayer, and was ready to do anything he could to secure his desire. The members became as anxious as he, and at last were rewarded. When the foundation-stone was laid, tickets for the tea had been sold which brought in the sum of £50, and at the opening of the chapel the same amount was raised in the same way. Both occasions were times of great rejoicing.

In 1894 he removed to Wheatley Hill, where he now is, and during his residence there he has taken part in thirteen great missions, the greatest of which is known by the name Bell’s Mission, when 600 people professed conversion. Strange as it may appear, Edward Ferry, some little time before it took place, stood up in the week-night service and somewhat startled the congregation by telling them the “Lord had just told him He was going to send a revival greater than anything they had ever experienced.” Some who heard the declaration were dumbfounded, and repeatedly asked him when “the revival would come.” His answer, which was in a different spirit from the question, was: “As soon as you are ready for it, but it will not be long.” The scenes during that revival cannot be forgotten, and although many have gone back into the world, the memory of their saving joy will abide for ever.

That is not the only time Ferry has declared beforehand what was going to occur. He has been known to tell the exact number of converts there would be at certain meetings. A very remarkable case is in relation to a mission which was going on at Cassop. Ferry had been praying a great deal about it. It was Wednesday night, and he was again engaged in prayer. Suddenly there came to him a vision of the following Sunday night’s service. There were nine converts – two married women and seven young men. He also heard a lady singing the “Glory Song,” and a young man sing “When I survey the Wondrous Cross,” &c., to the tune of “Job.” He told this vision to one or two of his friends, but nothing was said to the missioner or to the friends at Cassop, which is two miles and a half from Wheatley Hill. Ferry was planned on the Sunday, and at the close of the service he hurried off to Cassop, which was near, for the prayer meeting. As he entered the chapel the lady had just begun to sing the “Glory Song,” and every item of his declaration was realised.

Three years ago he became impressed that he ought to commence a class for the purpose of gathering up backsliders and the lukewarm. His thoughts were communicated to the leaders’ meeting, and liberty was given him to do his best, and to-day he has a class of fifty-nine members.

In the pulpit he has always something helpful for his congregation. He is not an orator, nor ever desired to be one, but aims at making his message understood and as suitable as possible. Many of his illustrations are taken from pit life, and though at times somewhat quaint, are so apt and forceful that they are not easily forgotten. There are plenty of applications for his services.

In spirit he is kind, helpful, sympathetic, straightforward, honest; and whilst unwilling to utter a word which will wound, he never hesitates to say what he believes is necessary. A man of prayer, he spends many hours on his knees, and happy are the persons who enjoy his friendship and are among those for whom he prays. Deeply interested in the young, he defends and encourages them by all means at his disposal. Often has he presented a valuable book to a young man whose wages would not allow him to purchase it; and to others whose wages are not so small he has made similar gifts to encourage and persuade them that someone was interested in their career. Greatly and widely respected, he is doing a work which day by day carries joy an gladness to many hearts, and which is helping to bring about that time when the extremes of society shall meet at the Cross. Many benedictions are pronounced upon his head, but not more than have come from his life upon others. He represented his Circuit at the last District Meeting.

Edward was born in 1851 at Shotton Colliery, Co Durham to parents Robert and Dorothy. Robert was a coal miner. Edward was baptised on 21 August 1851 at Durham.

Edward was a coal miner.