A veteran and His Memories 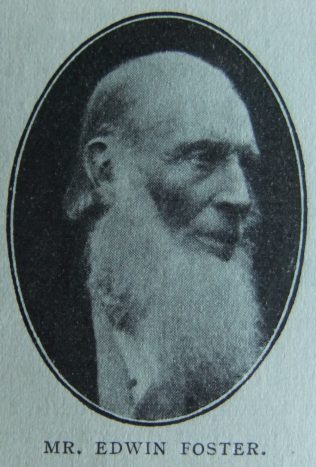 Transcription of ‘Sketch’ In the Christian Messenger by J H Howlett

MR. EDWIN FOSTER of Nether Heyford, Northants, in his eighty-third year, has keen remembrance of what some are fond of constantly referring to as “the good old days,” but our aged, yet vigorous and honourable friend will have none of the phrase. “They were,” he says emphatically, “bad old days.”

Mr. Foster is a typical son of the soil, and notwithstanding the weight of his years, his frame is still erect, his intellect keen, his memory fresh. The iron of the old days of Protection has gone too deeply into his soul for him to forget. “You cannot forget the days,” he says, “ when men were getting seven and eight shillings per week; when boys started to work at seven years of age for the sum of three pence a day. If they worked hard until they were about fifteen they might receive sixpence a day.”

Mr. Foster also had experience of the parish doles of from two to three shillings which were distributed to the very poor. “I, myself” he says “had to go for the dole for my parents when I was a little chap, and I well remember the look of pain on my mother’s face when I returned one day with the news that the dole was stopped. Tea and sugar were luxuries not to be had, and we used to have kettle-porridge for breakfast, that was bread and salt and water. For dinner there was bread and potatoes, so we got just enough to keep out of the grave. When I started to work at eight years of age, my tommy-bag for the day contained a lump of bread and a bit of skim-dick, hard enough for a football and made from skim-milk. I know a man who used to have a bit of bacon on Monday. He would pull the same bit out of his bag every day, take a longing sniff at it, then put it back again, only falling to the temptation of eating it on Saturday. Another poor man I knew was as pleased as a child when he could get a little flour, a bit of liver and a potato to make into a dumpling, and that man was called “ Liver Dumplings” to the end of his days. That was in the good old days. Bah! “

Mr. Foster recalls the burning in effigy at Braunston of Sir Robert Peel, whose opposition to the Repeal of the Corn Laws aroused the anger and wrath of the villagers. The effigy was taken all round the village and at many houses short speeches were made. When the party reached the residence of the Baptist minister, the pastor came out and said that Sir Robert was a very bad man and gave them a shilling.

Mr. Foster has a most creditable record of fifty years service with the L.& N.W.Ry. Co., having retired on pension some few years ago. There is a most extraordinary record of fatalities in his family. His father was killed at Bugbrooke, Northants, his eldest brother was killed in America, another brother in France, a third brother lost his life in the railway tunnel of Stowe Hill, and a fourth lost his leg by being run over in King’s Cross tunnel. He himself received what he playfully calls a pat on the back from an engine, but by the grace and mercy of God his life was spared.

Edwin Foster was born at Coventry, January 28, 1829. But his parents early removed to Braunston, the home of the family for generations. In 1844 the family removed to Heyford, where Mr. Foster has since resided.

Mr. Foster has ever been a man of strong Free Church principles and has known what it is to suffer for them. Many have been the battles royal our brother has witnessed, the whole village being intensely roused on one occasion when the vicar refused his daughter’s burial because of his Nonconformist principles, insisting that his own minister should officiate.

For many years Mr. Foster has faithfully served the Church and still occupies the office of joint stewardship. The walls of his room are adorned with the photographs of Primitive Methodist worthies from Hugh Bourne and William Clowes downward. An ardent missionary enthusiast, Mr. Foster is still a collector and walks considerable distances to solicit donations. We rejoice that our brother is yet able to attend the public worship. May his evening be full of joy and peace.

Edwin was born to William Foster and Mary Chamberlaine. William worked the land.

Edwin worked as a railway signalman.