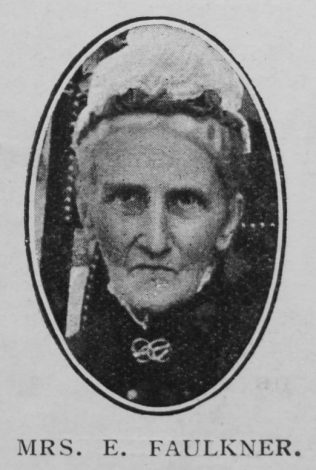 Transcription of obituary published in the Primitive Methodist Magazine by J.H.H.

The death of Mrs. Elizabeth Faulkner, at the age of 77 years, has removed a prominent and honoured worker from the village church of Lower Heyford, Northampton Third. All her married life had been associated with this village cause. From her marriage, on Christmas Day, 1861, her home was ever open to the preachers. Like her husband, Mr. T. G. Faulkner, the present Society Steward, Elizabeth Faulkner came of Christian training, and was a member of the Church at an early age. Her concern for the prosperity of Zion soon manifested itself in her concern for the spiritual care of the young life of the village and her proposal of a Sunday School for the children. “If we do not care for the children,” said the young bride, “there will be no Church in the future,” and from that time, when the first School session was held with a handful of children, till her death, Mrs. Faulkner served faithfully to preserve the young life to the Church.

Of her seven children two sons and five daughters are members of the Church, and actively engaged in its service, the sons being lay preachers and one daughter the wife of the Rev. C. Moore. The golden wedding was joyfully celebrated on December 28th, 1911. The end came after a brief illness. Together with her husband Mrs. Faulkner had a rich Christian experience, revelled in Christian fellowship, and gladly recognised the Divine claim to her heart and life. She peacefully fell asleep, trusting in her Lord and Saviour. A memorial service was held by the Rev. J. H. Howlett on Feb. 18th, and at the close a memorable time was spent in prayer, praise and testimony, when friends and relatives gave inspiring evidence of their faith in the risen Christ.

Before her marriage Elizabeth worked as a bonnet maker (1861).