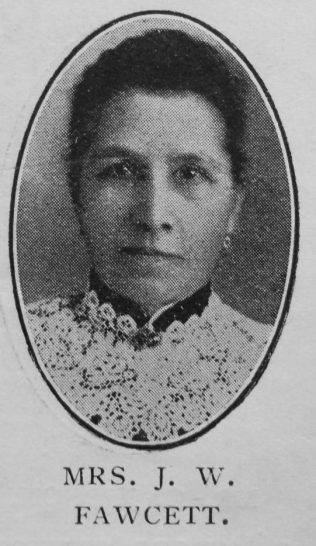 Transcription of obituary published in the Primitive Methodist Magazine by T.B.

Sarah Dodsworth Fawcett, beloved wife of Mr. J. W. Fawcett, of the Leeds IX. Circuit, entered into rest, after a brief illness, December 7th, 1909. Born at Acaster Malbis, near York, she removed to the Cathedral City when but a child, and a few years later came to Leeds. About 1860 she joined the Primitive Methodist Church at Quarry Hill, where her membership continued unbroken until the erection of Harehills Avenue Church in 1903.

In early womanhood she was a Sunday School Teacher, and possessed, and held through the years the fine fervour and exquisite piety which characterised that period of our Church’s history. Her confidence never faltered, and in widening spheres of usefulness she remained a fine example of simple faith and love. One of the Foundation Stones of the beautiful Harehills Avenue Church bears her name, and she opened the Organ which was erected a few years later. At public functions of our Church life in Leeds and neighbourhood, in her own name, and that of her husband, she rendered valuable and cheerful assistance.

A woman of strong common sense and remarkable fortitude, chastened by sorrows and yet greatly blessed, always seeing the bright side of things, there is no wonder that she was often sought for in trouble.

She was as true a helpmeet “as God ever gave to a man,” and as a mother she has left her children a tender and precious memory that must be an inspiration and joy all through their lives. Seeming to foresee the end, she declared her resignation to the will of Him she had trusted so long, and her faith found expression frequently in lines which the years had made increasingly precious, “Fixed on this ground will I remain” Somewhat suddenly the doors of life opened and, hearing her Saviour’s call, she entered to join the fellowship of the redeemed for ever.

Before her marriage Sarah worked as a housemaid (1861).