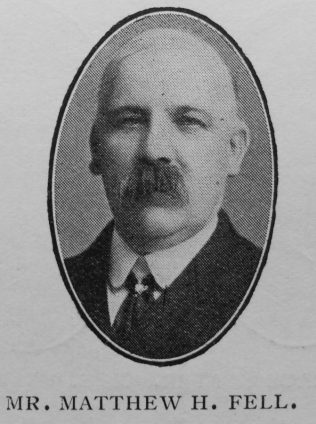 Transcription of obituary published in the Primitive Methodist Magazine by H.F.

Our church in Scarborough has suffered severely by the death of Mr. M. H. Fell. After attending three services on Sunday, February 12th, he returned home in apparently his usual health. About eleven o’clock he was suddenly seized and died shortly after. The circulation of the sad news the following morning startled the whole town and was received by Primitive Methodists with inexpressible grief.

He was never more active in church affairs than during the weeks immediately preceding. Every night for a month he had been present at special prayer meetings and evangelistic services. Fine tributes to his character and work were paid on the day of the interment by Rev. J. Reavley; at a special “In Memoriam” Service at St. John’s Road on Sunday morning, February 19th, by Rev. Geo. Bennett; and on the same day at the Young People’s Institute by Mr. W.H. Coates. On the three occasions exceptionally large congregations were present. The pulpit of St. John’s Road Church was draped with white instead of black. Only a few weeks before, when attending the funeral of another member of our church, he said to the caretaker: “When my turn comes, no black for me, please. Let me have white, and in letters of gold have on it ‘I am the Resurrection and the Life.’ ” He always thought of death as a home-going; a triumph-song; a day-break.

He was born at Flamborough, 21st January, 1855; and attended the Wesleyan School and Church until leaving home. During his apprenticeship at Bridlington he and a friend attended a special service in the old-town P.M. Chapel. The preached Word went home to his heart, and he surrendered to the claim and charm of the Saviour of men. Joining the Church he began what proved to be an unbroken membership of thirty-seven years. Later, he removed to Sheffield, where he soon gave evidence of marked ability for public work. While there he came on to the Plan. A good presence, a ready utterance, a great aptitude for illustrating Gospel truth from the facts of common life, made him a welcome occupant of any of our pulpits.

On coming to Scarborough, he joined our Jubilee Church, but for the last twenty-four or twenty-five years, St. John’s Road had the advantage of his work. In addition to preaching, he did magnificent service as Circuit Steward, Society Steward, Trustee, Class Leader, and President of Young People’s Institute. He was for many years member of District Committee, several times delegate to District Meeting, and twice he represented his District in Conference.

Anything like a worthy word-portrait would require more space than is here at our disposal. He was of cheery and confident disposition and had a happy way of inspiring hope and effort in others. He could rally the forces of God with — remarkable skill. Endowed with strong will, decisive judgment, emphatic speech, it was not easy to move him from what he believed to be the best policy for the Church, but if found in a minority he would help to make the best of the decision arrived at. The writer has never known a man more devoted to his Church. He was almost intolerant of those who found pleasure in talking it down, and he could never understand those for whom one service on a Sunday was sufficient. He loved the House of God.  Depression in the Church was a greater trouble to him than depression in trade. Generous and hospitable in the extreme, he loved to have the preachers in his home. Social fellowships meant much to him. Hence the gap he has left in the Church and among a wide circle of friends is large and to many can never be filled. He will be sadly missed for years to come.

Through all his labours he was assisted by a wife whose Christian graces have endeared her to all who know her. We bespeak for Mrs. Fell and the family the prayers of our Church, and the consolations of the Gospel of our Lord.

Matthew was born on 21 January 1855 at Flamborough, Yorkshire, to parents Tanton, a fisherman, and Keburah.