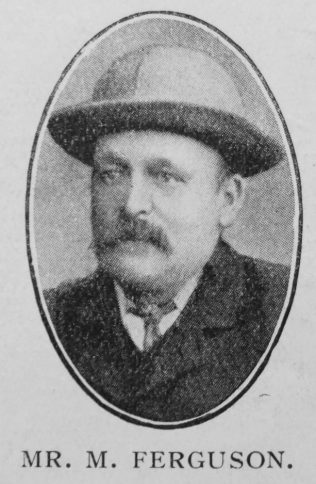 Mark Ferguson was born near Lowick in North Northumberland on Aug. 26th, 1856. He left his birthplace in childhood, and after short stays at Bedlington and Widdrington, removed to Stakeford, where he lived for the rest of his life—about forty years. Converted in youth at West Sleekburn, he joined our Church at Stakeford and remained a member to the end.

He had considerable musical talent, and with his family, who are accomplished musicians, he was in constant demand among the neighbouring churches, but the Sunday School claimed most of his attention and energy. This work he loved intensely, and he was never so happy as when among the children. For thirteen years, up to the time of his death, he was superintendent.

His daily business took him much into the open air, and he always carried with him the freshness of nature. His was a cheery, inspiring presence, and his passing means a great blow to our Church and school at Stakeford.

He died November 8th, 1911, and was interred in Cambois churchyard. The sympathies of a wide circle of friends are extended to the bereaved family.

Mark was born on 26 August 1856 near Lowick, Northumberland, to parents Walter, a coal miner, and Jane.

He married Margaret Johnson (abt1861-1881) on 19 June 1879 at Combos, Northumberland. Census returns identify one child.