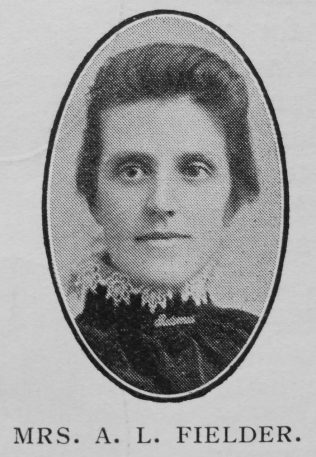 The Church at Purbrook, Portsmouth First Circuit, has suffered a great loss through the death of Mrs. Fielder. She was born at Blandford, Dorset, of Wesleyan parents, her father being an able local preacher and earnest temperance worker for many years. When a child of only nine years she was led to Christian decision, at sixteen began speaking in public, and at nineteen became a worker in the Salvation Army. She was appointed to the Channel Islands, and ultimately as a Missionary in South Africa, where she laboured with marvellous success for three and a half years, when health failed and she returned home. She then conducted many successful missions, large halls were crowded, and many conversions witnessed.

After marriage with Mr. Herbert Fielder, she became a local preacher, but devoted herself to her home duties, her own beloved Church at Purbrook, and the large Bible Class on Sunday afternoon, which she established nine years ago. The sick and poor were her constant care. Her various and exceptional gifts were used constantly and whole-heartedly for her Lord. Her beautiful home was ever open to the servants of her Master.

A most devoted wife and mother, while nursing her little girl, sick with fever, she took cold, which was followed by pneumonia, and in a few days passed away on February 18th, in her forty-fourth year. She was interred in the Garrison Churchyard on the 22nd, by her Ministers, the Revs. John Buck and Walter J. Hammersley, in the presence of a large number of friends and representatives. A memorial service on the 26th, was conducted by Rev. J. Buck, when the deepest sympathy of the Church was expressed with the sorrowing husband and four young children. She is gone, but her work and influence abide, for she, “being dead, yet speaketh.”

She married Herbert Seymour Fielder (1869-1944), a nurseryman and florist (1911), in the spring of 1901 in the Blandford Registration District, Dorset. Census returns identify four children.