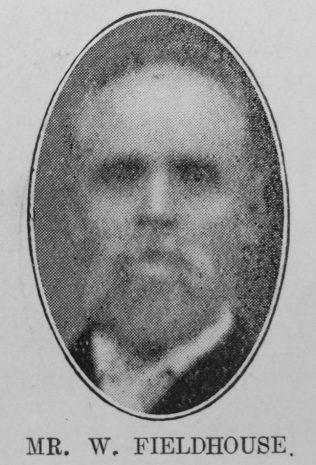 Transcription of Obituary published in the Primitive Methodist Magazine by C.C. Goodall

Skipton Circuit has lost another faithful worker and sincere servant of Christ. Mr. Fieldhouse was converted forty-seven years ago. He was one of a band of fifty converts won in a great revival. Of that band only one now survives. He had many educational difficulties to overcome in his early days; but in course of time he came on the plan as a local preacher, and served a long term in the Otley Circuit, being much in request not only in the pulpit of his own church, but in those of other churches also.

About eighteen years ago he removed to Skipton, and continued his preaching activities on this circuit with considerable acceptance. During the last few years, owing to ill-health, he has done very little preaching work, possibly the last bit of service he performed in this direction being to speak in the streets during a camp meeting procession in July, 1907.

Our departed brother was a true Primitive Methodist. Probably some would have described him as belonging to the old school. Certain it is that he loved to recall the memories of the past. Bye-gone struggles and triumphs he delighted to relate, but he was also fully alive to the present.

One of his chief delights was to attend, as a visitor, the Annual Conference of our Church. It was there that the writer first met him. In Connexional affairs he always took a deep interest. The last few weeks of his life were spent in the hospital, and when the writer visited him there he always found him deeply interested in the affairs of the circuit, and anxious about its welfare. He had a strong faith; trusting fully in Christ he met the last enemy triumphantly, and on Sunday morning, February 14th, 1909, after sixty-six years of earthly life, he passed through the gates into the City where there is no death, no suffering, no night; leaving behind him a bright testimony.

We laid his body to rest on the Wednesday following, and on Sunday, February 28th, the writer conducted a memorial service in our Gargrave Road Church, Skipton, which was largely attended.

William was born on 19 November 1842 at Wilsden, Yorkshire, to parents George, a wool comber, and Ann. he was baptised on 7 April 1844 at St Matthew, Wilson.