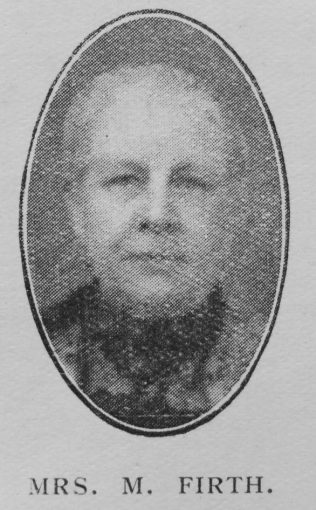 Transcription of obituary published in the Primitive Methodist Magazine by J.W. Waddell

Mary Firth passed to her eternal home Feb. 8th, 1911, in her seventy-second vear. She attended Westgate Sunday School, Barnsley, as a girl. Her late husband, George Firth, with herself, was a member of Buckley Street Society for some years. When he died the widow moved out of town and was allowed to drop out of membership. The writer had her enrolled at Doncaster Road, and counted it a great joy to take a class ticket and visit her. Once she offered sixpence for her contribution, which was strangely akin to the widow’s mite, and would have received the same commendation.

Bronchitis and heart weakness prevented her getting to God’s house in her latter years, but Christ was precious and His truth was the bread of life to her soul. She was a faithful wife, an affectionate mother, a good woman. She lived near her Lord and was ready to die. As she hovered near the  borderland she was heard to say, “George, I’m coming.” One son and daughter are left to mourn their loss, but her end was peace.

Mary was born abt1838 at Hoyland, Yorkshire, to parents Thomas, a labourer, and Elizabeth.