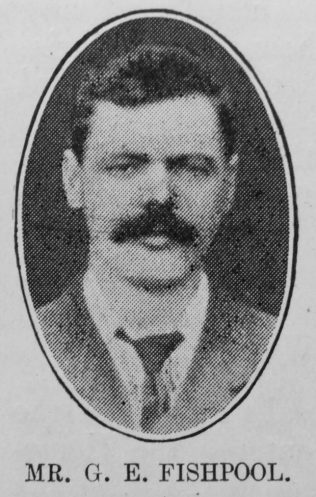 Not only our Guisborough Church but our Circuit and District have sustained a great loss by the death of Mr. G. E. Fishpool, who succumbed to a sharp attack of pneumonia on April 4th, 1908, at the age of thirty-three years.

He was one of the brightest and best of men that we have ever known. The greatest part of his service for Jesus was spent in connection with our Margrove Park Church. It was there he was converted and for many years he nobly laboured in all branches of church work. About twelve months ago he removed to Guisborough and heartily joined in service there till he received the higher call,

As a preacher he was one of the most promising and useful of our younger men. Not only in his own circuit was he greatly appreciated but many circuits and churches welcomed his ministry. To him, preaching the Cross was a glory and delight.

And best of all he has left many who owe their spiritual birth to his faithful presentation of the Gospel.

He was a generous supporter of all good causes and by his departure many poor people have lost a sincere friend and helper. Our circuit, realising his work, had appointed him as delegate to the Shildon District Meeting and also to take part in the great Centenary Camp Meeting on Eston Nab on Whit-Monday.

But God desired him for higher service, and though we cannot understand the translation of one for whom we hoped long years of service were yet in store, we bow in submission to the Divine will.

The funeral, on April 7th, testified to the great respect and love in which our friend was held, as our capacious schoolroom was filled with mourners. The pathetic address of Mr. L. Jones, and the beautiful rendering by four members of the choir of the “Christian’s Good-Night” touched a tender chord in every heart.

May our Heavenly Father grant richest consolation and comfort to the widow and orphan children.

George was born in late 1874 at Loftus, Yorkshire, to parents William, a bricklayer, and Johanna.